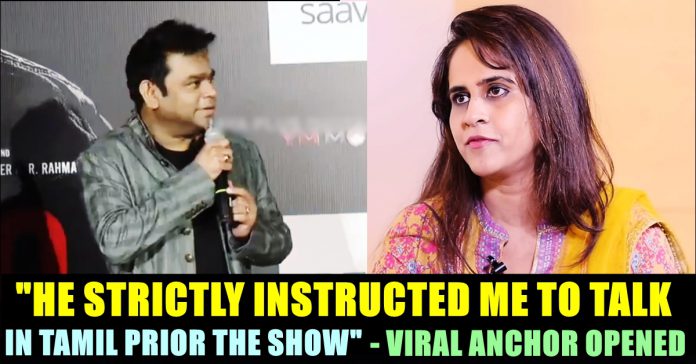 Anchor Who Got Trolled By A.R Rahman Opened For The First Time !!

Days ago, a video of A.R Rahman trolling a female anchor for speaking in Hindi in the event of his debut production “99 songs”, went viral in social media platforms. Now, the anchor appeared in an interaction with a youtube channel and shared about the true context of the incident. She said that A.R Rahman asked her whether she speaks Tamil fluently or not prior the event.

The viral video showed A.R Rahman leaving the stage after expressing his shock over the anchor using Hindi language to welcome the protagonist of his debut production “99 songs”. The musician exclaimed “Hindi” after seeing the anchor welcoming Ehan Bhat in Hindi and left the stage immediately asking “I asked you whether you know Tamil or not, ain’t I ??’

Oscar winning A.R Rahman turned a story writer and producer through “99 songs”, a film which was directed by a debutant named Vishwesh Krishnamoorthy. The film marks the feature film debut of Ehan Bhat as a hero. The ensemble cast of the musical drama includes Edilsy, Tenzin Dalha, Lisa Ray, Manisha Koirala, Rahul Ram, and Ranjit Barot. Ahead of the film’s release, A.R Rahman conducted an event having the top musicians of Tamil film industry as chief guests along with some of the stars. The event took place at Chennai on Thursday.

Followed by Rahman’s answer, RJ Sano who hosted the show, welcomed Bhat by speaking in Hindi. Rahman who was taken aback a bit, exclaimed “Hindi” immediately and started leaving the stage. When crowd in the hall roared, Rahman asked “I have asked you whether you know Tamil or not, ain’t I ?” After a break, he chuckled and said that it’s just for fun.

Now, RJ Sano appeared in an interaction with Cinema Vikatan and opened on the original context of the entire incident. “Before the show, while we were discussing, Rahman sir asked me whether I know Tamil or not. When I said that I can talk in Tamil fluently, he strictly instructed me to talk in Tamil throughout the event” Sano said in the interaction.

Sano also said that she talked in Hindi to Ehan to make him a bit comfortable. “Ehan was reluctant. To make him express himself, I used that one sentence.” Sano said and made sure that she is a “Tamil ponnu” during the end of the interaction.

Previous articleOpinion Poll Result Of Puthu Yugam Television Channel Out !!
Next article“I Have Muted My Expectations Down” Youtuber Harija On Her Postpartum Depression

A Bengaluru resident received his future wife's intimate videos with another man right before his marriage. The man who sent the videos alleged that...