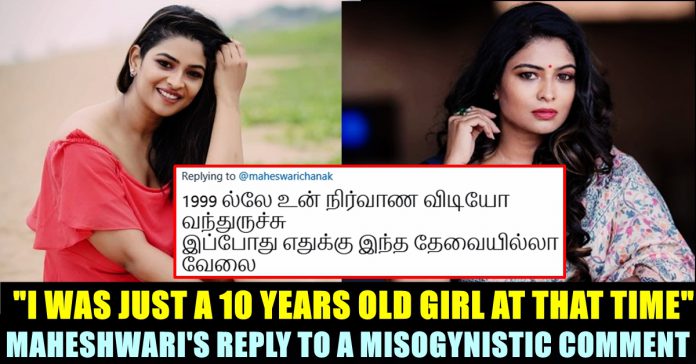 Anchor Maheshwari’s Fitting Reply To An Insensitive Comment Of A Man !!

Video jockey Maheshwari who has been impressing her followers by conducting photoshoots, never shied away to give back to trolls and abuses. Most recently, a man named as “Vijayanthran” made an insensitive comment on her post which made the former Sun music anchor to shut him down for once and for all.

Social media networks have become a great platform for people to connect with each other. Moreover, celebrities also use it for connecting with their fans and to share their daily routine as well as professional updates related to their lives. However, there are some people on these networks who have a hobby of criticising, shaming or trolling others and females who are working in media are their favourite target. There is no doubt that being a female, especially while working in media, is not an easy task as public always keeps an eye on them and their every move is analysed.

Days ago, Anchor Maheshwari who is known for hosting shows in various prominent channels, is busy engaging her followers by uploading her pictures from the photoshoots. She is currently hosting a show called as “Comedy Khilladis” and “Petta Rap” in Zee Tamil channel. The Actress gave a come back to her hosting career after giving birth to her baby boy.

From Sun music to Isai Aruvi, she hosted several shows and appeared in few serials such as Thuyamanavan and Pudhukavithai. She also debuted in tamil film industry through a film named as “Kuyil” and acted as Ajay Raj’s wife in the sequel of Venkat Prabhu’s Chennai 28. Recently, on seeing a post of her in twitter, one Vijayandhran made an insensitive statement saying that he saw her naked video back in 1999.

The post of the anchor was to update about one of her upcoming projects. “Hi from sameera :))) wait for the exciting news” her caption for the post read.

Hi from sameera :))) wait for the exciting news 🥰😛 pic.twitter.com/Yt6TpU2KYR

Replying to this post, the man made an insensitive comment saying that the naked video of Maheshwari came in 1999. “Why are you doing these kind of activities now ? No one here longs for flesh. Don’t live in Tamil nadu. Run away to Andhra” his harsh comment said.

Replying to this comment, Maheshwari said that she was only 10 years old during 1999 by adding laughing emojis. “I was a child at that time sir” she sarcastically trolled him. “Wow 1999 la ya vanthuchu sir appo yennaku 10 vayasu than irrukum. sirr apoo na kolantha sirr” read the reply of Maheshwari.

Many followers of Maheshwari who saw this reply, trolled Vijayantharan for making baseless, insensitive, misogynistic statements against women in social media platforms.

Referring to the recent Udhaipur incident where a tailor was brutally killed by two men, Tamil actress Kasthuri who is pretty much active in...

Promotions for "Jagame Thanthiram", the upcoming film of Tamil actor Dhanush are in full swing. Director Karthick Subbaraj has been attending interviews and Netflix...

The announcement made by the most famous celebrity couple Priyanka Chopra and Nick Jonas about themselves becoming parents all of a sudden, surprised fans,...

Environmental Impact Assessment is a process or study which predicts the effect of a proposed industrial/infrastructural project on the environment. It prevents the proposed...