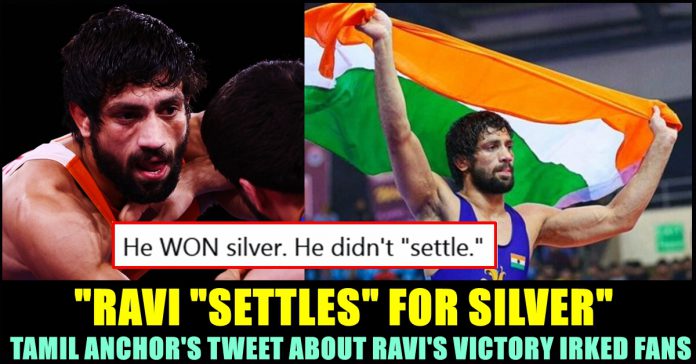 Ravi Kumar Dahiya lost to Russia’s Zavur Uguev in the final at 4-7 in the men’s 57 KG freestyle event. After Sushil Kumar, Ravi became the second Indian wrestler to win the silver medal at the Olympic games and fifth wrestler to bag an Olympic medal. Despite his best efforts, Ravi couldn’t beat the Russian who is a two time World Championships Gold medalist. It is notable that Ravi Dahiya is the reigning Asian Champion in the men’s 57kg freestyle category and a bronze medallist at the 2019 World championships.

Ravi had the Russian on the mat and fought back to make it 2-2. However, Uguev immediately retaliated and picked a couple of points to end the explosive first round with the score at 4-2. In the next round, the Russian extended his lead to 3. Right after that, Uguev was dominating Ravi The Indian raised hopes of a quick turnaround in the final minute as he attacked Uguev with great gusto. However, the Russian overpowered yet again and caught in a hold as the final seconds ticked away. Uguev ended up winning the match with 4-7.

As soon as the result was out, the entire country wished the wrestler for his immense achievement of winning a silver medal. Sports minister Anurag Thakur wished Ravi for his victory by writing “You did it Ravi ! Congratulations! Your spirited performance is a matter of immense pride for every Indian! What an incredible journey ! What an amazing day for Indian sports” and many others including President of the country lauded him for the feat.

INDIA 🇮🇳 Wins🥈!
You did it Ravi ! Congratulations!

Your spirited performance is a matter of immense pride for every Indian!

What an incredible journey !
What an amazing day for Indian sports!#Tokyo2020 pic.twitter.com/jpE32poN1q

India is proud of Ravi Dahiya for winning the wrestling Silver at #Tokyo2020. You came back into bouts from very difficult situations and won them. Like a true champion, you demonstrated your inner strength too. Congratulations for the exemplary wins & bringing glory to India.

Meanwhile, Sumanth Raman, popular Tamil commentator and political analyst came up with a tweet spreading the word on the result. His tweet offended so many as his choice of words irked the fans of team India. Instead of saying that Ravi “WON” silver, Raman said that Ravi “SETTLED” for it and announced about Ravi’s failure through his tweet.

Ravi Kumar settles for Silver,loses to Uguev of ROC in the 57 kgs Finals. #Tokyo2020

“He WON silver. He didn’t settle.” a twitter user expressed her disagreement with the tweet of Sumanth whereas another user uploaded a tweet of actress Taapsee Pannu and suggested Sumanth to learn from her. Check out some of the tweets below :

Totally lost all the respect for your Doc…is this how you project it?

That's a terrible way of saying a news. "Settles for silver'. Seriously? Doc are you appreciating our undermining his achievement? Cuz it feels like you're doing the latter

Another 'settles'. Boss, you try going up against the reigning world champion and 'settling'. Nonsense commentary. https://t.co/tBgLQxx4FL