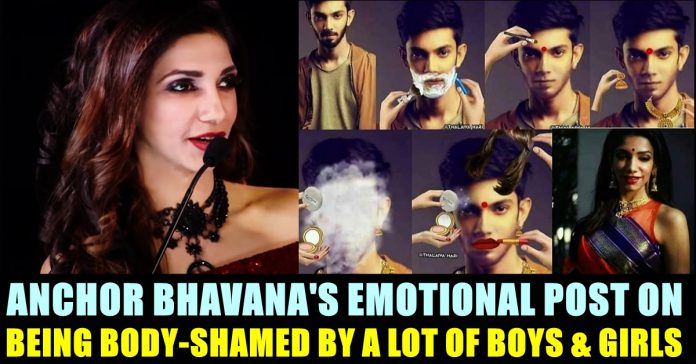 Anchor Bhavana who is known for her appearance in TV shows has came up with an emotional post on being body shamed by the users of social media. She expressed her emotions through a long post while replying to her friend and colleague actress Iswarya Prabhakar. On seeing Bhavana’s outer appearance being compared with music director Anirudh, TV actress Aishwarya who is known for appearing in serials and in reality shows of Vijay TV, made an art in which she portrayed Bhavana as “Maleficent”, a fictional character featured in Hollywood film “Sleeping beauty”. The character also portrayed by actress Angelina Jolie in a 2014 film titled as “Maleficent”. The character is defined as “Mistress of all evil”.

After drawing the art, Iswarya Prabhakar said that she drew this after seeing her friend and anchor Bhavana being compared with music director Anirudh. In her instagram post, she said that she initially thought it was just fun. But while looking deeper into the issue, she came to know how female anchors are being treated all these years. Though many things changed in our society, one thing that didn’t change is where Female anchors has to play dumb or to be trolled, Iswarya believed. She said that Bhavana is extremely talented and she should be recognised by her talent not by her looks. “Like the mysterious MALEFICENT a woman can be beautiful, magical & graceful with her own horns & wings” she wrote in her post and asked them not to body shame women.

Drew this to my Darls ~ Bhavs 💝 @bhavnabalakrishnan as Maleficent…|| • ~REASON BEHIND THIS ART~ The meme where @anirudhofficial when given a makeup & wig looks like Bhavana… Ok! At first it was fun & I thought Bhavs or Ani mela yaaruko gaandu pola…athan ipdi kelapi vitu irukanga.. But then after so many days I still see ppl are chumma commenting Ani name in Bhavs posts.. This made me look deeper in to the issue….In media one can start off with looks but can only survive with talent.!! So why on earth a person who proved to be extremely talented gets to be called of names?? It’s been 5yrs since I said Tata Babye to Tamil industry & moved to the other side of the world.. Soooooo many things have changed in these past 5yrs! Tamil Nadu faced multiple CMs, Historic Protests, Great personalities loss, Countless Youtube Channels, Anchors became actors & Everyone is giving awards to Everyone!!!! But one thing that didn’t change is where Female anchors has to play dumb or to be trolled…..Well..Come on!! if a female can give a spontaneous counter, let her! Her grace shouldn’t be defined by her capacity to take all the trolls politely !! My Friend Bhavs here is an immensely talented person, my most fav female anchor to work with, who is beautifully maneuver btw Entertainment shows & Sports, her body transformation, Singing, she got so much to be appreciated & admire about..!! So I put out this message to everyone out there bcz I still believe *A person should be recognized by their TALENT & NOT JUST LOOKS*…… Like the mysterious MALEFICIENT a woman can be beautiful, magical & graceful with her own horns & wings……just bcz some egomaniac script writer/ producer felt insecure, a woman doesn’t need to play dumb or wait for someone to save her in every story… Unleash your superpowers my dear sweethearts!! Shine brighter!! ***Despite of the gender I request everyone PLS STOP THIS BODY SHAMING & BEING JUDGMENTAL…..in the least time we have on the earth let’s spread goodvibes & positivity !!!! • #illustration #procreate #artist @perfectportraits4u

On seeing this post, Bhavana who felt overwhelmed came up with an Instagram post, explaining how she it feels to be body shamed by boys and by some girls. Bhavana said that she worked hard to become leaner which made her to lose “a ton of weight on her face“. “it became fodder for a lot of boys ( and some girls) to abuse me. Call me names, a boy, a transgender, compare me to #anirudh and body shame me.” wrote Bhavana in her post. “But I was raised to be STRONG and POWERFUL. So I would hold my head high and March forward.” she added. Bhavana said that this gesture of her colleague made her emotional. She thanked Iswarya with her whole heart and said that she will look at it when she begins to doubt herself.

Pic 1 – @artiswarya drawing me as maleficent.
Pic 2 – her explaining why she did that
Pic 3 – I come out and tell you the truth.
Please Read and SHARE if you connected with it in any way.
.
.
Let’s STOP #bodyshaming let’s atleast TRY🙏🙏🙏 pic.twitter.com/XyKr9ln4H3

For a very long time, Netizens are comparing the looks of both Anirudh and Bhavana in social media platforms. Since “Master” audio launch which was hosted by Bhavana, the trolls and memes started taking over the Internet.

Netizens Thrashed Azeem After He Said “I’m Not Like This Outside” !!

In the weekend episode, Azeem, while talking to Ulaganayagan Kamal Haasan, said that he is the person who displays similar attitude to the outside...