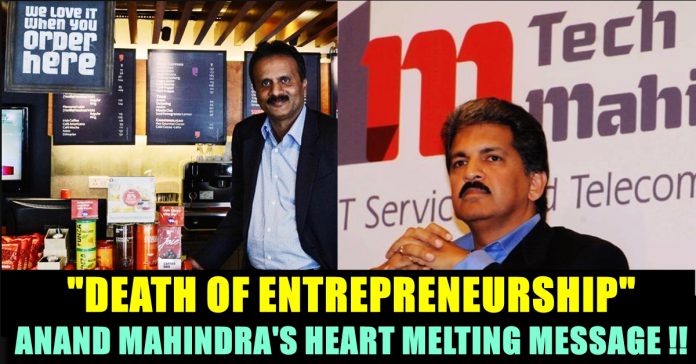 Chairman of the Mahindra Group, Anand Mahindra apart from being famous for his work, is also quite famous for his social media presence. Hours before Cafe Coffee Day founder VG Siddhartha’s body was found, industrialist Anand Mahindra had a word of caution for entrepreneurs whose businesses may not have taken off. I did not know him & have no knowledge of his financial circumstances. I only know that entrepreneurs must not allow business failure to destroy their self-esteem. That will bring about the death of entrepreneurship. https://t.co/H4ysr8Ov3U

VG Siddhartha, the founder of India’s largest coffee chain, was found dead on Wednesday morning, 36 hours after he went missing from a bridge near Mangaluru in Karnataka. His body was washed ashore the Netravati river early Wednesday morning.

Mr Siddhartha, 60, had reportedly written a letter to board members and employees of Cafe Coffee Day. The letter – accessed by news agency ANI – alleges harassment by an income tax officer and expresses regret for not being able to create “the right profitable business”.

Here’s the alleged letter that was written by Siddhartha : He also said that he was under “tremendous pressure” from one of “the private equity partners”. Siddhartha opened his first CCD outlet in August 1996 in Bengaluru’s most-visited shopping street, Brigade Road. The chain has grown to 1750 stores across India along with 60,000 vending machines, besides presence in Vienna, the Czech Republic, Malaysia, Nepal and Egypt.

He married the daughter of former Karnataka Chief Minister SM Krishna’s daughter, and they have two children.

WATCH : Arnav Released Private Videos Of Dhivya Arguing With Him !!

A video that shows television actress Dhivya verbally attacking Arnav, seemingly in their house got surfaced in internet and it was uploaded by Arnav...

In the latest episode of Bigg Boss Tamil season 2, Vaishnavi requested Bigg Boss to let the inmates sleep peacefully in the night. She also urged...

Days ago, video of a man attacking Vijay Sethupathi at airport went viral across the media platforms with fans expressing their shock over it....