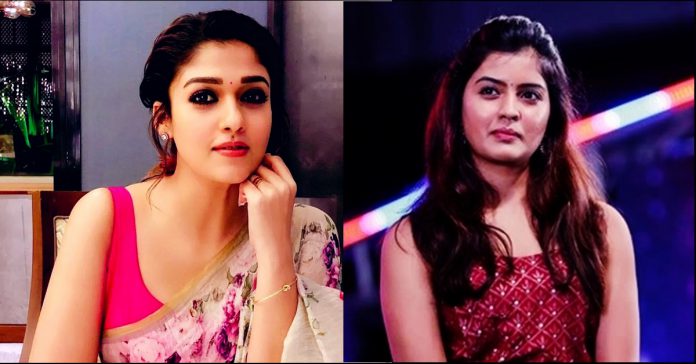 Apart from Vijay, Nayanthara, Yogi Babu, Bigil had 15 girls as a football team squad. Indhuja Ravichander, Varsha Bollamma, Amritha Iyer are few of the player who were given importance in the movie. Amritha played a role called as Thendral who is the captain of the state team.

Before Bigil, Aiyer made her film debut with Padaiveeran, where she played the role of Malar. She was later seen playing one of the female leads opposite Vijay Antony in Kaali. But only after essaying the role of “Thendral”, Amritha became the darling of social media. The actress who is very much active in Instagram, enjoys nearly 3 lakh followers in Instagram.

In a recent post of her, Amritha thanked her co-star Nayanthara for gifting a watch on her birthday. In her post, an emotional Amritha, thanked Nayanthara for inspiring so much. The message she wrote to Nayanthara read as “My most favourite person 😊 she’s such a sweetheart ❤️ Also thank you so much for the gift you had given me for my Birthday which made me feel so special. I will cherish this forever ❤️ Thank you for being so inspiring. #nayantara#singapenney#Bigil”

Here’s the pictures she posted while conveying this message :

My most favourite person 😊 she’s such a sweetheart ❤️ Also thank you so much for the gift you had given me for my Birthday which made me feel so special. I will cherish this forever ❤️ Thank you for being so inspiring. #nayantara#singapenney#Bigil

Comment your views on this message posted by Amritha Iyer to Nayanthara !!

Actor turned politician Kamal Haasan opened about his Bigg Boss salary for the first time in a public event. While campaigning for his party...

Former English cricketer Nick Compton deleted his tweet about Kohli after facing severe backlash from fans of Indian cricket team. After the end of...