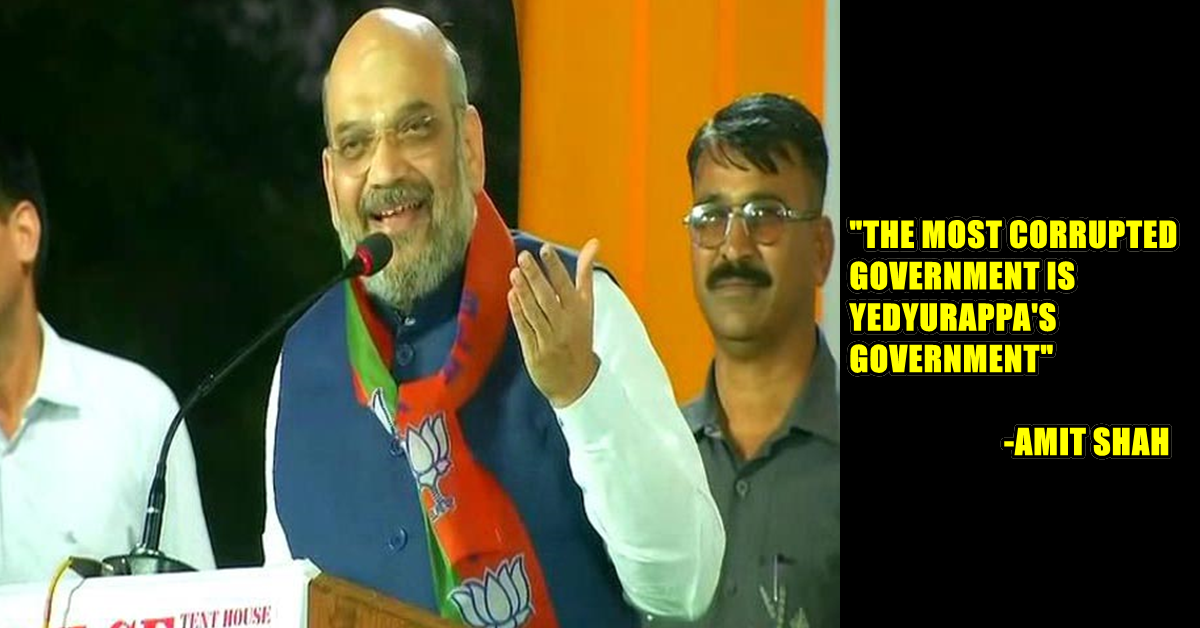 BJP chief Amit Shah today left his Chief Ministerial candidate in Karnataka, BS Yeddyurappa, embarrassed with a slip of tongue, and quickly corrected himself. But that didn’t check the rapid circulation of the video clip on social media, mostly by Congress supporters. While rattling off allegations against Karnataka’s Congress government led by Mr Siddaramaiah at a meeting in Karnataka’s Davanagere, Amit Shah said, “Recently a retired Supreme Court judge said if there was ever a competition of the most corrupt government then the Yeddyurappa government is number one…” Mr Yeddyurappa was sitting next to him.

Another leader was seen quietly whispering into his ear. Mr Shah immediately corrected himself. Within seconds, the Congress went on overdrive, tweeting and retweeting the video.

Now that the BJP IT cell has announced Karnataka elections, time for a sneak preview of our top secret campaign video!

Gifted to us by the BJP President, our campaign in Karnataka is off to a fabulous start. He says Yeddyurappa ran the most corrupt Govt ever…

The Congress was not alone in ridiculing Shah and the BJP after Shah’s faux pas. “Among his 100 lies, one truth costs Amit Shah heavily,” one Twitter user said. Another said it was now time to watch “how the BJP IT Cell covers up this mess”.

Mr Yeddyurappa – who was chief minister of the first BJP government in Karnataka from 2008 — was forced to step down in August 2011 amid corruption allegations by Karnataka’s ombudsman or Lokayukta, Santosh Hegde. He was accused of colluding in illegal iron-ore mining in the mineral-rich district of Bellary. In 2016, he was acquitted in case, where he was accused of accepting kickbacks worth Rs. 40 crores.

The BJP has named the 75-year-old, who commands a strong support among the Lingayat community, as its Chief Ministerial candidate ahead of the elections – a rare move by a party that usually contests elections without one.

10 Unknown Facts Of “The Legendary Tarantino” That Will Make Our Jaw Drop !!
GVM vs Karthik Naren On Twitter : GVM Treats Young Filmmakers Like Shit! SHOCKING !!