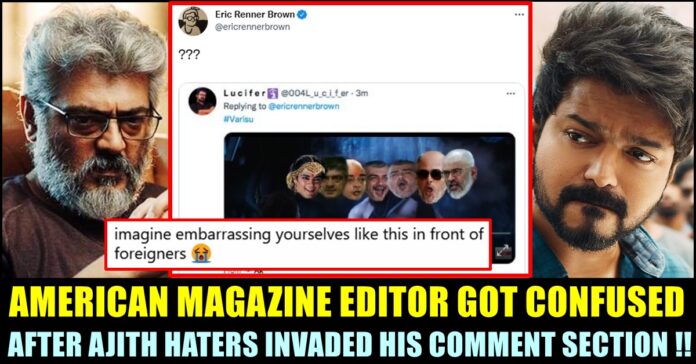 American magazine editor Eric Renner Brown who is working for reputed magazine Billboard, got confused after haters of Tamil actor Ajith kumar invaded his comment section of a tweet which was posted about himself witnessing a tortoise. Uploading the screenshot of the mindless comments made by the Tamil actor’s haters, Eric expressed his confusion by dropping question marks.

The rivalry between actors Ajith and Vijay is a never ending one and the abusive hashtags they trended against each other in the past is nation wide famous. Fans of actors Vijay compare the fans of Ajith kumar with tortoise and the latter compare the former with squirrel for unknown reasons.

Saw Tortoise for the first time last night. Everyone should see Tortoise

The tweet garnered 900 plus likes so far and the comments and quoted replies are abnormally high in numbers. Hundreds of comments started flooding Eric’s tweet that left him puzzled.

The troll videos that surfaced garnered views in millions but were removed due to the copyright issues. Most of the display pictures of the commenters contained actor Vijay’s photo. Here’s the screenshot Eric uploaded after seeing the comments :

“I was talking about the wickedly talented post-rock band RIP my mentions” he said in his next tweet.

Here’s how internet reacted to the screenshot uploaded by Eric :

imagine embarrassing yourselves like this in front of foreigners 😭 https://t.co/Lae8pGMpcF

Who’s gonna tell them that they ain’t funny at all https://t.co/tWUnLjoIPa

Dei 🐿️s why are shaming us normal folk in front of Foreigners by doing this shitty job.. ? #Varisu #Thalapathy67 https://t.co/EgTM7SeXmI

TN FM Dr. PTR Took An Old Tweet Of Sadhguru & Decoded It To Roast Him !!