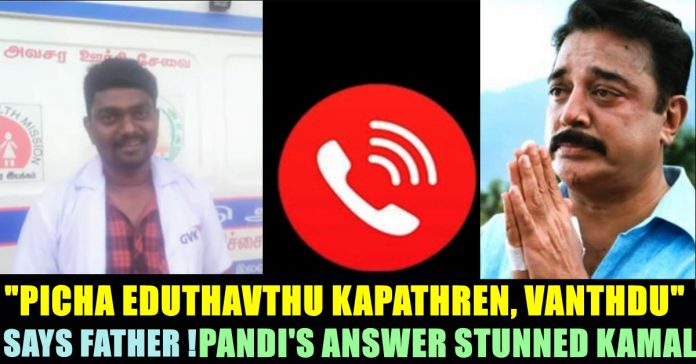 On hearing a conversation between Pandithurai, an ambulance driver and his parents, melted many people’s heart including Makkal Needhi Maiam president Kamal Haasan’s. In the conversation we can see the parents compelling their son to leave the job right away to avoid getting infected from the deadly virus. Pandithurai, convincing his parents by saying that nothing would happen to him and he joined in it with his whole heart.

The deadly virus killed more than 37,000 people across the world so far. To avoid the damage, Prime minister of India announced lockdown till 14th of April. However, Doctors, Politicians, Police officers, cleaning staffs, medical staffs, media reporters are required to continue working to combat the virus. Public people who are following social distancing are lauding their effort through social media platforms. The only way they could help them is by being quarantined. One of the many unsung heroes of this crucial situation are Ambulance drivers. By just wearing masks and gloves, Ambulance drivers are carrying patients from their home to hospital without thinking of the consequence. One of such Ambulance driver is Pandithurai whose audio conversation with his Father and Mother surfaced in Internet recently.

In Chennai, 3 ambulances with various facilities were made to help the patients affected by Coronavirus. Pandithurai from Virudhu nagar’s Srivilliputhur, is driving one of those Ambulances. In the audio conversation, Pandithurai’s father can be heard requesting his son to leave the job immediately, after knowing about the threat made by the deadly virus. He says that he would even beg to earn money to make his son leave the job.

“Are you touching the patients who are affected by the fever?” asks the father to which Pandi says that he would only close the door and drive the vehicle. “I will be wearing mask and gloves, I have already told you that I won’t get affected. Don’t panic” he consoles his Father.

“I would even beg to fulfill your requirements, you don’t have to inform them just leave the job and go to our relative’s home in Chennai” the worried father says. “If everyone thinks like this who would do this job then ?” Pandi questions his father. “There are 1000 people to take care of the country, I want you. They are not going to give you reward or anything to honour you. Understand” Father replies. “I came to this job with my whole heart. I can’t leave this like this” Pandi firmly denies his father’s advice.

Pandi also convinces his Mother in the same phone call. At one point his Mother’s voice breaks in sorrow but Pandi continues to convince his Mother. Hear the audio conversation below :

This audio conversation grabbed the attention of senior actor and a political party’s leader Kamal Haasan. He said that these kind of selfless human beings are the real heroes. “His heart which asks what will happen to the nation while hearing the cries of his parents is God” said Kamal Haasan in “Anbe Sivam” manner.

Let us salute this brave and selfless heart of Pandi Thurai and help him by following the social distancing by staying home !!

A 22-year-old IT engineer was doused with fuel and burnt alive at her home in Adambakkam on Monday by her former classmate after she...