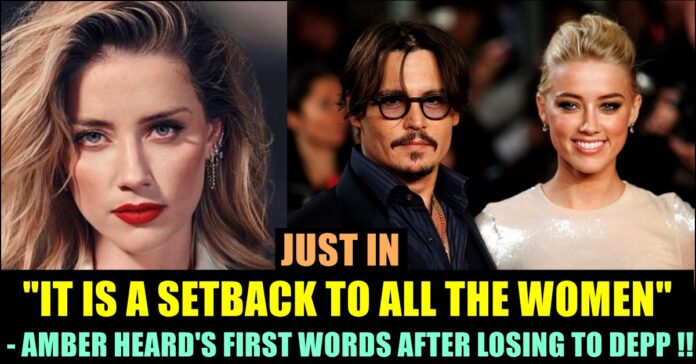 After losing the defamation case against her ex-husband, Amber Heard came up with a note conveying her emotion to her fans, followers and media. On Tuesday night, the jury in the dramatic legal battle, which was Underway at the Fairfax county, Virginia for the past six weeks, announced that Johnny has successfully proven that Amber had defamed him when she wrote a 2018 Washington Post op-ed alluding to her past claims of domestic violence.

Amber told Johnny Depp to tell the world that he, a man, was a victim of domestic violence and see who is gonna believe him. The whole world believes him. Today he won ❤️ #JohnnyDepp #AmberHeard pic.twitter.com/2QUq3leVkA

Heard is now ordered to pay USD 15 million im damages to Johnny Depp. Reacting to the Verdict, Heard came up with a note in her official social media handles and said that the disappointment she feels today is beyond words.

“The disappointment I feel today is beyond words. I’m heartbroken that the mountain
of evidence still was not enough to stand up to the disproportionate power,
influence, and sway of my ex-husband. I’m even more disappointed with what this
verdict means for other women. It is a setback. It sets back the clock to a time
when a woman who spoke up and spoke out could be publicly shamed and humiliated” said Amber through her post.

“It sets back the idea that violence against women is to be taken seriously. I believe Johnny’s attorneys succeeded in getting the jury to overlook the key issue of Freedom of Speech and ignore evidence that was so conclusive that we won in the UK” She further said.

“I’m sad I lost this case. But I am sadder still that I seem to have lost a right I
thought l had as an American – to speak freely and openly” The actress concluded.

In March 2019, Depp filed his USD 50 million defamation lawsuit against Heard whom he was married to from February 2015 to January 2017, after she wrote a Washington Post essay in which she described herself as aa “public figure representing domestic abuse”.

Here’s how Johnny Depp reacted to the verdict :

Previous article“Sir, Pls Get Enough Sleep” – Singer Shweta Requested A.R Rahman In His “RIP KK” Post !!
Next articleDebate Between Seenu Ramasamy & Follower Over A Father Getting “No Caste” Certificate For His Daughter!!

Tirupur Subramanyam, famous distributor and the head of Tamil nadu distributors association, slammed Vijay and Ajith for not promoting their recently released films like...

Ever since South Indian films such as Bahubali, KGF, RRR & Pushpa did extremely well in the North Indian circuit, fans of Bollywood cinema...

After the #Pray For Nesamani hashtag which went viral across the world, Actor Vadivelu who originally played the character of Contractor Nesamani gave an...