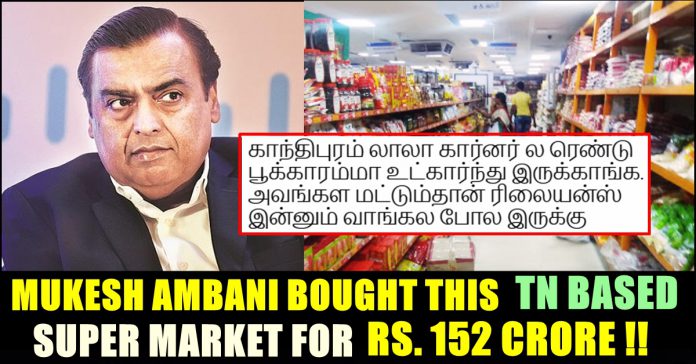 SKDS is a 20 year old company as it was incorporated on 15th September, 1999. Retailing fruits and vegetables, dairy, staples, home and personal care and general merchandise is what Shri Kannan Departmental store engaged in. Occupying retail area of over 6 lakh square feet, SKDS currently operates 29 stores across Coimbatore and nearby areas.

In FY 2018-19, FY 2018-17 and FY 2016-17, SKDS reported revenue from operation of Rs. 415, Rs. 450 crore and Rs. 481 crore garnered a net profit of Rs. 2 crore, Rs. 3 crore and Rs. 4 crore respectively. In a regulatory filing, Reliance Industries Limited said that the investment will strengthen the group’s retail operation and its presence in State Tamilnadu. “It will further enable retail and new commerce initiatives” it added.

As soon as the news surfaced, Tamilnadu based twitter users started reacting to it in various ways. “My god, reliance going to rule india in few years!!” said one of them where the other one wrote “Wow wow. Didn’t see that coming”

I have seen many pictures.

My god, reliance going to rule india in few years!!

Last year, Reliance retail faced a turnover of Rs.1.3 lakh crore with a registration of over 50 crore footfalls. Currently it is getting operated in nearly 7000 cities and towns. Through the new commerce initiative, Reliance plans to link producers, traders, small merchants, brands and consumers through technology. It is aiming to be one of the top 20 retailers in the world by the end of next five years by leveraging blockchain, Internet of things, Artificial Intelligence and other new technologies across India.