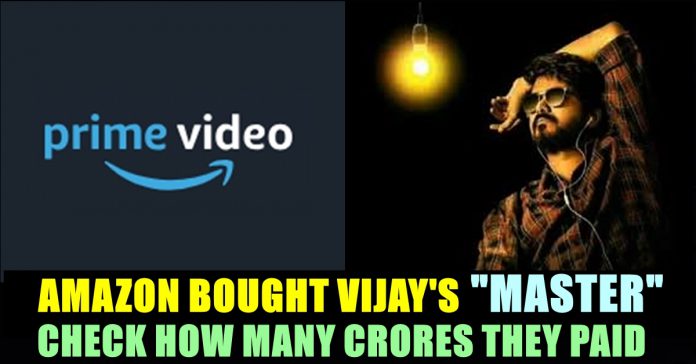 Vijay’s upcoming film Master’s online streaming rights has been bagged by Amazon prime for a huge sum of amount. After all the furore that took place between Theatre owners and Cinema producers, first two Tamil films that are going to get a direct online release were announced. Ponmagal Vanthal released and is currently streaming in Amazon Prime and Keerthy Suresh’s Penguin is going to be released on 8th of July. Apart from direct online releases, people are also showing immense interest in watching old films in online streaming platforms.

Though the owners of online streaming platforms tried hard to make “Master” and “Soorarai Pottru” to get direct online release, makers of the films firmly denied and announced that the films are going to be released in theatres. “Soorarai Pottru” team went one step ahead and officially announced the censor rating of their film to make sure that the film is going to get a theatrical release. The film got a clean “U” and is allowed to be watched by people of all groups.

It’s a U for #sooraraipottru pic.twitter.com/m5bJ3cDFlm

As theatrical release for “Master” is also confirmed, Amazon Prime bought the film to stream it post theatrical run. “Master” broke the record of “Bigil” which was made of Rs.180 crore as far as online selling is concerned. Despite of its less budget, “Master” got sold to Amazon for Rs. 15 crores whereas Bigil earned Rs. 14 crores through Amazon Prime. However, a report has said that upcoming films of Rajini, Vijay, Ajith are going to be sold for Rs.25 crores, considering the content and market value of the film.

The film which was supposed to release on 9th of April month got postponed without further notice due to the threat being created by Coronavirus across the world. Lately, makers of the film released a poster and said “Lockdown shouldn’t knockdown our spirits! Master will meet you soon” to the fans who asked them to release trailer at least.

Audio launch of the film took place just before the lockdown announcement and it escalated the expectation level for the film. So far three looks of the film has been released and the lyric videos of Kutti Story, Vaathi Coming, Antha Kanna Paathakka are trending in youtube.

Talking about the trailer of the film, Arjun Das who played one of an antagonist is the film, said “I have watched the trailer almost six times. The trailer looks deadly but I think it will release only after the release date is confirmed. I can assure you one things. No matter how long it will take for the trailer to release, it will be worth the wait. Just wait for few more times and I am sure the producer will release the trailer in the right time” said Arjun who went on to talk about a particular dialogue delivered by “Thalapathy” Vijay in the trailer.

“There is a shot in that trailer. That one dialogue (going to be delivered) by Vijay Sir. I have a strong feeling that people are going to go crazy about it. I can’t wait for all of you to watch the trailer.” said Arjun who also cleared the air on “Master” getting released in OTT platforms.

Comment your views on Master being bagged by Amazon for 15 crores !!

Celebrities Mourning For The Demise Of This Veteran Actor !!