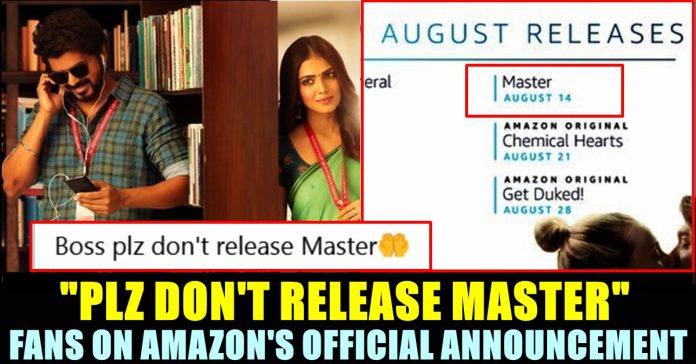 Despite of the several confirmations from the makers of “Master” movie on the film’s release plans, fans again came up with speculations asking if the film is going to get released in Amazon Prime after seeing a post from the OTT platform’s official twitter handle. The film which was supposed to release on 9th of April , postponed without further notice due to the Corona outbreak. Many people believed that the film In a recent interaction with Vikatan youtube channel, producer Xavier Britto confirmed that the film will release only in theatres with the celebration of fans. Director Lokesh Kanagaraj also said that he is waiting for the COVID 19 pandemic to end to let the updates regarding the film out.

Now, a recent post of Amazon Prime’s official twitter account which announced about the OTT platform’s release for August month, included Master film. It said that the film is going to release on 14th of August.

Confused fans, started questioning about it in the comment section of the post. One of a Vijay fan seeked Amazon help to get his doubt cleared. Another fan went one step ahead and requested Amazon not to release the film on August 14. Check out some of their reactions below :

Currently, we do not have any announcement on this yet. Kindly stay tuned to our website for further updates. ^CS

Hi is this confirm Master will be release August 14th?

May I know which master movie ??

However, Forbes website has confirmed that a film named as “Master” that got released in the year 2017 is going to be streamed in Amazon on 14th of this month. Sources revealed that Vijay’s “Master” has nothing to do with this recent update of the OTT platform. The film could have been released on the same date on Amazon, if it got released in theatres on April 9 as per the initial plan.

However, Amazon Prime bought the film’s rights to stream it post theatrical run. “Master” broke the record of “Bigil” which was made of Rs.180 crore as far as online selling is concerned. Despite of its less budget, “Master” got sold to Amazon for Rs. 15 crores whereas Bigil earned Rs. 14 crores through Amazon Prime, according to reports.

Audio launch of the film took place just before the lockdown announcement and it escalated the expectation level for the film. So far three looks of the film has been released and the lyric videos of Kutti Story, Vaathi Coming, Antha Kanna Paathakka are trending in youtube.

The main crew of popular spoof comedy show "Lollu Sabha" has revealed that actor Vijay and his father SA Chandrasekar searched for them for...

Pradeep Ranganathan who is currently basking in the success of his recently released film "Love Today", is busy promoting the film in Telugu regions...

RJ Balaji Slammed Dinamalar For Their Headlines About Him!!