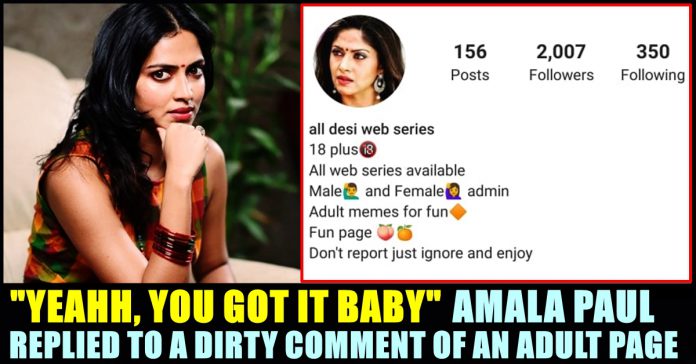 Actress Amala paul who predominantly appears in Tamil films, replied to an adult page in Instagram and her instant reply is going viral among the users of the photo/video posting social media application. To the meme page that dropped an inappropriate comment about her dance moves in the reel video, the actress made a reply endorsing the same which grabbed the attention of her followers and other users of Instagram.

Actress Amala Paul who is known for being bold in on and off screen was last seen in Director Rathna kumar’s “Aadai”. Her personal life and the decisions she makes has always been a concern to media and public. For past few months, the actress has been engaging her 36 lakh followers with her experimental looks. On Monday, she came up with a reel video that showed herself shaking legs with her close relatives at a party.

“Crash landed at my BIG BROTHER @abijithpaul ‘s bachelorette with his fiancé @alcakurian and bestie @caspiannie 😹💃💘 Why should boys have all the fun? Because we love you boys 😜😁💗 Thankuuu dear thomachan @thomasfrancis07 and @simevents.in for hosting and great surprise party 😍” read the caption of her reel post.

On this post, a page with 2000 plus followers, handle name of which reads “All Desi Web Series”, dropped a comment saying “The way she shaking her🍑 shows wat she wants for today night” and the actress, added a reply to the comment saying “yeahhh you got it baby!!”

Bio of the page read that it is an 18 plus page which provides all web series.

Amala Paul who rose to fame among Tamil audience through her “Mynaa”, went on to appear in a number of successful films such as “Velai Illaa Pattadhari”, “Thalaivaa” etc. She is also one of the many actress who is very much active on social media platforms. Amidst the pandemic, Amala was busy experimenting on conducting photoshoots by wearing different kind of attires.

Most lately, on seeing one of the actress’s post, a set of followers posted mean comments thinking that the actress would not care them. One of such follower named as “Kausar Hanan” posted a comment writing “only legends can see” referring to the actress’s private part of her body.

The comment of him received 300 plus endorsements and Amala who saw this comment, couldn’t resist herself from replying to it. The actress replied to Kausar asking him to catch her up as she is in 2020. “what tits ?! 🤣LMFAO catch up we are in 2020 bruhhhhh !!! #legendsandtits ⁉️” her reply read.

Previous articleHashtag,’MSDians Stand With Kohli’ Goes Viral Since Last Evening!! Here Is Why!!
Next articleRCB Getting Hilariously Trolled For Scoring 92 Runs After Announcing About Donating To Frontline Workers !!

Emerging Player Shubman Gill who is currently opening for Gujarat Lions captained by Hardik Pandya, replied to trolls who criticized him for his slow...