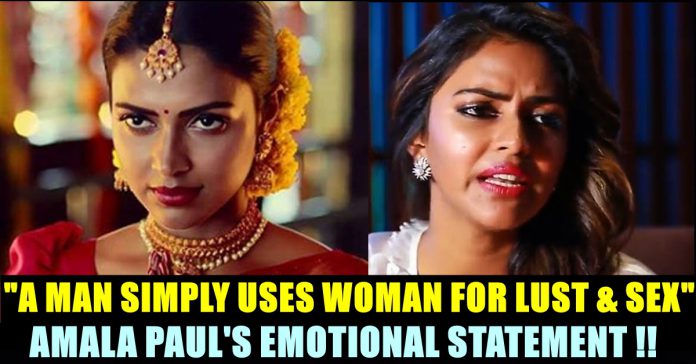 Actress Amala Paul who is known for being bold in on and off screen was last seen in Director Rathna kumar’s “Aadai”. Her personal life and the decisions she makes has always been a concern to media and public. Recently, a series of pictures released in social media saying that the actress got married to Mumbai based singer Bhavinder Singh. The pictures of her marriage is going viral in the social media platforms. However, the actress hasn’t made any official announcement regarding the news yet.

The actress who rose to fame among Tamil audience through her “Mynaa”, went on to appear in a number of successful films such as “Velai Illaa Pattadhari”, “Thalaivaa” etc. She is also one of the many actress who is very much active on social media platforms where she raised her voice for the MeToo movement by accusing director Susi Ganesan along with independent filmmaker Leela Manimekalai. She also caught up in number controversies after divorcing director Vijay.

In the year 2014, Amala Paul married Director A.L Vijay with whom she worked in films like Deiva Thirumagal, Thalaiva etc. However, After two years of marriage life, the couple decided to separate and got divorced in the year 2017. Since the separation, both of them became very much busy in their respective fields. Now, Amala Paul has came up with an Instagram post defining a man’s role woman’s life after reading The Prophet written by Khalil Gibran in the year 1923.

In her post, Amala has said that all the best question in “THE PROPHET” are asked by women-about love, about marriage, about children, about pain-authentic, real. She said that the question arisen in a woman and not in a man because she has suffered slavery, humiliation, economic dependence and above all a constant state of pregnancy.

Followed by this, Amala Paul goes on to explain the struggles a woman going through during her pregnancy. “She is always feeling like throwing up, vomiting. When child has grown to nine months, the birth of the child is almost the death of the woman. And when she is not even free of one pregnancy, the husband is ready to make her pregnant again.” her post reads.

Amala said that it seems that a woman’s only function is to produce crowds. She further blamed men for not participating in the pain she suffers. A Man is simply using woman as an object to fulfil his lust and sexuality. “He is not concerned at all about what the consequence will be for the woman.” she wrote.

Her post further said that a man truly loves a woman, the world would not have been overpopulated. “His word ‘love’ is absolutely empty. He has treated her almost like cattle.” she said through her post.

All the best questions in THE PROPHET are asked by women- about love, about marriage, about children, about pain-authentic, real. . Not about God, not about any philosophical system, but about life itself. Why has the question arisen in a woman and not in a man ? Because the woman has suffered slavery, the woman has suffered humiliation, the woman has suffered economic dependence, and, above all, she has suffered a constant state of pregnancy. . For centuries she has lived in pain and pain. The growing child in her does not allow her to eat. She is always feeling like throwing up, vomiting. . When child has grown to nine months, the birth of the child is almost the death of the woman. And when she is not even free of one pregnancy, the husband is ready to make her pregnant again. It seems that the woman's only function is to be a factory to produce crowds. . And what is man's function ? He does not participate in her pain. Nine months she suffers, the birth of the child she suffers- and what does the man do ? As far as the man is concerned, he simply uses the woman as an object to fulfill his lust and sexuality. He is not concerned at all about what the consequence will be for the woman. . And still he goes on saying, 'I LOVE YOU'. If he had really loved her, the world would not have been over populated. His word 'love' is absolutely empty. He has treated her almost like cattle. . #osho #thebookofwoman #woman #slaverystillexists #ancestralhealing #powerfulwords

Currently Amala Paul is spending her quarantine time in her hometown Kerala with her Mother. On the work front. Amala Paul is expected to appear in “Adho Antha Paravai Pola”, Aadujeevitham” and in the remake of hit web series “Lust stories”.

Probably The First Person Who Watched 2.0 Except The Crew !! Check What She Has To Say !!

Rajinikanth's upcoming film 2.0 is being helmed as one of the most expensive films ever made in the history of cinema. The film marks the...