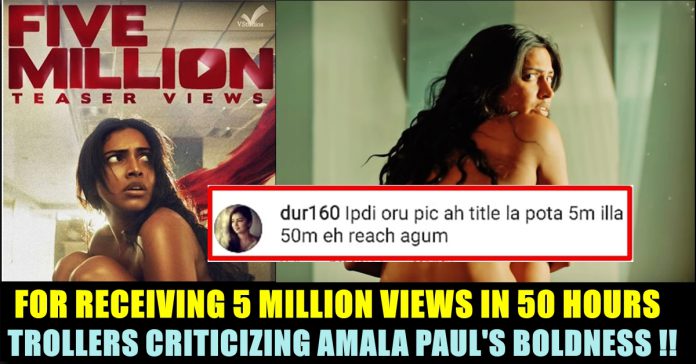 The teaser from Amala Paul’s upcoming movie Aadai was released on Tuesday on YouTube by Think Music India. The teaser has been successful in creating buzz soon after its release and has received a positive response from the audience and critics. The Aadai teaser begins with a quote of philosopher Jean-Paul Sartre, ‘Freedom is what you do with what is done to you’, which hints at a survival story of a girl, who fights back to reclaim the freedom snatched away from her. Freedom is what you do with what is done to you. The most-awaited Aadai teaser begins with this quote of philosopher Jean-Paul Sartre, hinting at a survival story of a girl, who fights back to reclaim the freedom snatched away from her. As soon as releasing, AADAI Teaser received 5 million views in very short time. Sharing it in her official Instagram account, Amala Paul wrote “So so happy for 5M views. Overwhelmed with the love and support you guys have showered upon #TeamAadai With your continued support, #Aadai will sure go on to break all the records! “

However most of her followers who felt the teaser as poignant, expressed their opinion in the comment section. Celebrities from all over the world became as a subject of online trolls. Being first of its kind in Tamil cinema, This teaser was trolled by netizens for the nudity of the lead actress.

The trailer shows a mother complaining to police about her daughter’s missing and informs them hesitantly that she was drunk during the last phone call she made. The trailer which is not spilling the beans on revealing the story line of the movie, shows one of the boldest shot in Tamil cinema ever which has Amala Paul waking up nude to the reality after being unconscious for a long time.

This is intense! Looking forward to watching the movie !! @Amala_ams 🔥 https://t.co/kHnk5zkKAS

What do you think on people making bad comments about the film’s bold scenes before the movie release ?? Comment your views below !!

Fans Got Upset Over Messi For Stopping Croatia Model From Keeping Her Promise!!

A promise made by former Miss Croatia named Ivana Knoll about going naked if her team enters the finals, is no longer valid as...

Doctor Sharmika Getting Trolled For Her Comment On Beef Eating!!

Doctor Sharmika who is known for providing health tips to people through YouTube videos and interviews, became a subject to severe criticism after making...