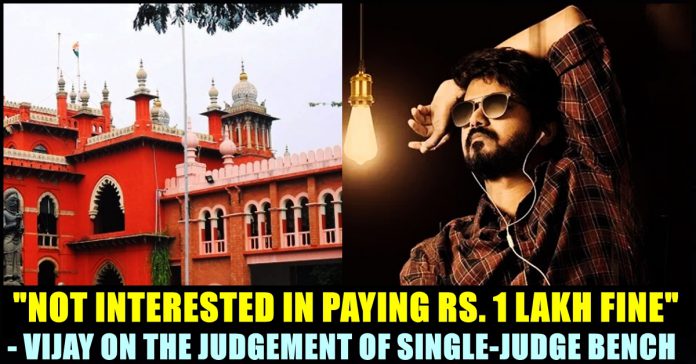 A recent report emerged saying that actor Vijay pointed out the COVID 19 relief fund that me made last year and denied to pay the fine amount that was imposed on him by Madras High court. The actor’s representatives had clarified that the actor is not interested in paying the fine amount Rs. 1 lakh after Madras high court stayed an order passed by a single-judge bench which had dismissed actor Vijay’s petition seeking the exemption of entry tax on his Rollys Royce Ghost which was imported from England. Users of social media platforms and the fans of the actor are reacting in various ways as soon as the actor’s stance on the issue made headlines.

It has been said that the actor is not going to pay the fine as he had appealed against the judgement of the single-judge bench who slapped Rs. 1 lakh fine on the actor. A bench comprising justices M. Duraiswamy and R. Hemalatha stayed the previous order passed by the single judge bench on 27th of July. Counsel of the actor submitted that the previous order contained “adverse remarks which created negative publicity” for the actor. The bench also stayed the Rs. 1 Lakh fine and asked the actor to pay the entire tax amount.

The court which has directed the tax department to issue a demand challan, asked the actor to pay the balance of the entry tax within a week’s time. Vijay moved to high court after feeling that the criticisms that were made against him were not necessary. His counsel moved the High court again, not against the tax but against the remarks made on him.

“Learned judge has cast aspersions on Vijay by labelling him as an anti-national and has cast aspersions on the whole acting community,” counsel of actor Vijay argued in court on Tuesday. “Out of 500 other similar petitions involving luxury cars, some even costlier, the case of Vijay cannot be picked out alone. Remarks need to be expunged. Costs were not awarded on any other cases” he further said.

“Actor Vijay is ready to pay the tax; every citizen is entitled to avail legal remedies to challenge the imposition of tax; to make derogatory remarks against a petitioner for availing a legal remedy is unjust” he further said and added “The same judge has dealt with other cases involving luxury cars with one-page orders, but in case of Vijay he passed remarks,” Vijay’s lawyer Vijay Narayan said.

Judge Subramaniam of Madras high court imposed Rs. 1 lakh fine for actor Vijay who sought tax exemption on a luxurious car that got imported from England in the year 2012. Now, on Wednesday, actor Vijay had said that he is not ready to pay the fine amount of Rs. 1 lakh as he had appealed against the judgement through his lawyer. The actor also pointed out the donation of Rs. 25 lakh he made last year for COVID 19 relief fund.

Previous articleFollowers Spewed Hatred At The Photoshoot Pictures Of Farina !! Here’s How She Reacted
Next articleWoman Accused Actor Arya Of Cheating Rs. 70 Lakh From Her !!