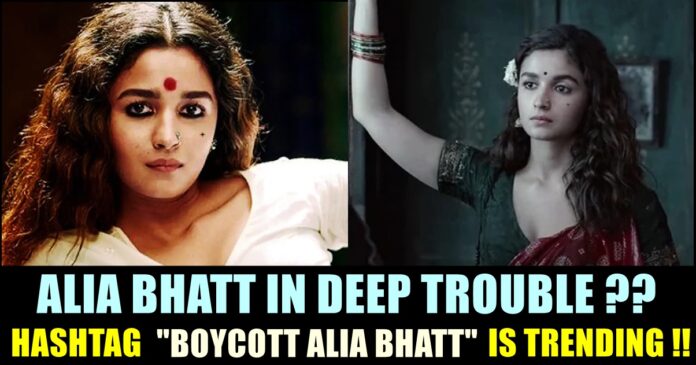 While actress Alia Bhatt is busy promoting her upcoming direct Netflix film “Darlings”, netizens found the trailer of it problematic and started trending “Boycott Alia Bhatt” in the micro blogging social media site. The film features her in the role of a domestic abuse survivor named Badrunissa Shaikh, alongside Shefali Shah, Vijay Varma and Roshan Mathew among others.

With just one day to go for the release of the Netflix film, netizens started trending “Boycott Alia Bhatt” in Twitter. Though, it’s common for them to “Boycott” anything about Bollywood that comes in their way, in the case of Alia Bhat, they claim that the story of “Darlings” promotes revere misogyny.

The trailer of “Darlings” shows Vijay in the role of Hamza Shaikh, Badru’s husband who beats her up until she decides to take revenge, kidnaps him, tortures him in the same house they live in.

The trailer shows Alia beating her husband with a pan, throwing water on his face, thrusting his face in a tank full of water, thrashing him left, right and centre and making constant plans not to kill him but treat him “exactly how he treated her”. In the 2 minutes 34 seconds long video, we can see the male lead being tried to a chair as Alia beats him up and uses injection to make him go unconscious to avenge all the sufferings she faced after their marriage.

Many users of social media believe that the film is going to promote domestic violence against men. More than 34 k tweets surfaced against the actress after the trailer of her film released.

Alia Bhatt not only acted in #Darlings, she produced it.

She produced a movie which makes entertainment out of torture of men by women.#BoycottAliaBhatt#BoycottDarlingshttps://t.co/FJYzMR7XnL

Is this what she wants to promote from Darlings #BoycottAliaBhatt pic.twitter.com/vE26kUpGX1

Thousands of male victims of domestic were traumatized after watching the trailer of Alia Bhatt’s movie #Darlings.

Now, they are now calling for boycott of Alia Bhatt’s films. #BoycottAliaBhatt

As if being a Nepo kid wasn’t enough, she produced and acted in a Movie that makes Fun of Male Victims of Domestic Violence.

With so much bias against Male Victims, this movie fuels it by saying:

“Male Victims of DV must have done something to deserve it”#BoycottAliaBhatt pic.twitter.com/QkmLvaXsbl

#BoycottAliaBhatt who is endorsing DV on Men.

Imagine if the genders were reversed! pic.twitter.com/OK4EDAe3pS

In #USA people supporting #JohnnyDepp for #DomesticViolence against MEN.

But in India Alia Bhatt promotes and make joke of DOMESTICVIOLENCE against MEN #BanDarlings#BoycottAliaBhatt pic.twitter.com/iFbNHKjXs8

#BoycottAliaBhatt who is endorsing DV on Men in #india

Imagine if the genders were reversed! pic.twitter.com/yZZVDL1Y1k