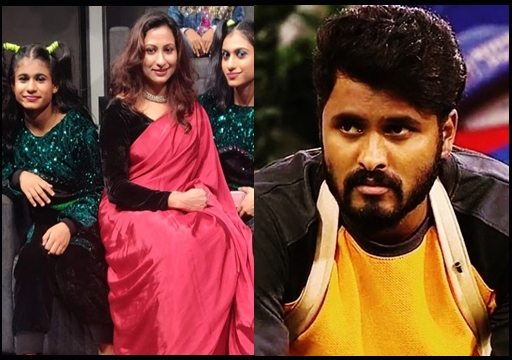 Alhena and Aishu who were participating in the Dance Vs Dance show of Colors TV, got eliminated from the show in the semi finals and missed to compete in the finals. If you are an ardent follower of Bigg Boss show Tami, you would have already known about the duo as they entered the house as the family members of Amir, a dancer who entered the house as a wild card contestant. Now, after their elimination, Shyji came up with an emotional post, asking Alhena not to cry as it would make Amir to scold her.

Amir, a dance choreographer who entered the Bigg Boss show as a wild card contestant, during the “Kadanthu Vantha Paathai” task, said that he lost his family and opened on how the family of Alhena adopted him as their son. The dancer said that the family which consists Alhena, Aishu, Shyju and Ashraf provided him a room to stay and looked after him as their son.

When Shyju, Alhena and Aishu entered the house during “freeze” task, Amir got emotional and embraced them. They also danced for a song before leaving the house. Now, the sisters duo who are the participants of “Dance vs Dance” show that is being telecasted in Colors Television, got eliminated with a difference of “one” from their competitors.

Actress Khushboo and Senior Dance choreographer Brinda, judges of the show, consoled Alhena saying that they did it better and are going to miss only one episode. However, Alhena couldn’t control her tears and expressed her wish of entering the finals to the judges. Sharing the video, Shyju, mother of the children, asked Alhena not to cry which will make Amir angry.

“I am already afraid of how he is going to react after coming out of the house” said Shyju and added that failure is new to her and advised her to move on. “Alhena azhudhu ena @amir__ads ta maati vituradhe 😪.already beedhile iruke ,vandhu ena soluvanu . For u failure is new ,so it’s difficult to accept. But for me and @aishu_ads .it’s a debut ,so we take it as a challenge to focus on victory ✌️. jus move on ……..” read the caption of Shyju who added the video of Khusboo and Brinda Master consoling her daughter.

Previous article“Rocky” Director Opened About The Similarity Between the Climaxes Of His Film & “Kaithi” !!
Next article16 Year Old Transgender Ended Her Life After Instagram Love Failure !!

“We Will Celebrate Vairamuthu” – Fan !! Chinmayi Hits Back !!

Chinmayi replied to a series of trollers and abusers yesterday through her official twitter account. Since the news of Vairamuthu receiving an award for...

Adil Ahmad Dar, Man Behind The Death Of 44 Soldiers !! Here’s Everything You Need To Know About Him !!

As 44 Central Reserve Police Force (CRPF) jawans died in one of the deadliest terror attacks in Awantipora, in Jammu and Kashmir's Pulwama district,...

Twitter Flooded With Wishes For Superstar Rajinikanth !! Check Out His Replies !!

Fans of Rajinikanth took to Twitter early morning on Wednesday in order to wish the superstar Thalaiva a happy birthday. As the actor-turned-politician turns ...