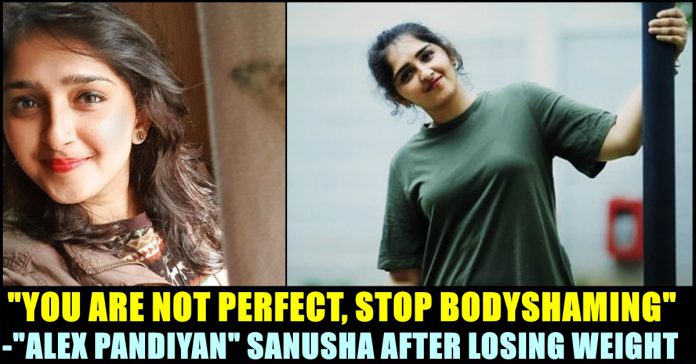 Actress Sanusha Santhos who is known among Tamil audience for acting in films such as “Reni gunda”, “Alex Pandiyan”, “Bheema”, “Eththan”, is pretty much active in social media platforms nowadays. She was last seen in Nani’s Telugu flick “Jersey” in 2019, is currently enjoying 7 lakh followers for her official Instagram account after uploading 665 posts.

On Wednesday, the actress came up with a selfie post of her with a caption schooling her online followers about not to judge others based on their body. She said that she loves herself chubby, asked them to stop bullying, stop worrying through her hashtags.

After acting in several films as a child artist, Sanusha debuted as a heroine in film industry through a Tamil film named “Naalai Namathe”. In Malayalam she debuted as heroine opposite Dileep in Mr.Marumakan and acted in several Tamil films. As far as her education qualification is concerned, the actress has a Master’s Degree in Sociology and prepared for Civil Services Examination at Shankar IAS Academy, Trivandrum.

Now, Sanusha, through her latest Instagram post, conveyed a message to her followers on “body shaming”. To those, Sanusha said that one doesn’t exist solely to lose weight and to be pretty. She said that there will be three fingers pointed at them if they try to body shame someone by pointing their two fingers. She also reminded them about their imperfection and suggested them to take care physically and mentally.

“Oh yes!! To everyone who’s been mentioning about my weight, worrying about it & being bothered by it too much, maybe even more than me mostly… Sweetheart, you don’t exist solely to lose weight & be pretty. When you get so much of “chori” to body shame someone, always remember when you point 2 fingers at a person, there are three fingers pointed towards you and love, you aren’t perfect either. Take care of yourself, physically & mentally” read her caption.

Sanusha was criticized by the users of social media platforms based on her body earlier. Now, after losing her weight through her sheer hard work , the actress seems to have chose to write a post replying to them to shut them once and for all.

Previous article“Casteism Is Alive & Thriving In The US” – Tamil Girl After Sharing Flat With An “Upper Caste” Vegetarian In US
Next articlePETA’s Post About “Fish”, “Food” & “Friends” Went Wrong !!

Mr. Local which was released a couple of days ago is a Tamil language romantic action comedy film written and directed by M. Rajesh. The...

Not many days ago, a report on Boat club residents welfare association submitting a formal letter to Chennai police officials demanding restriction in their...