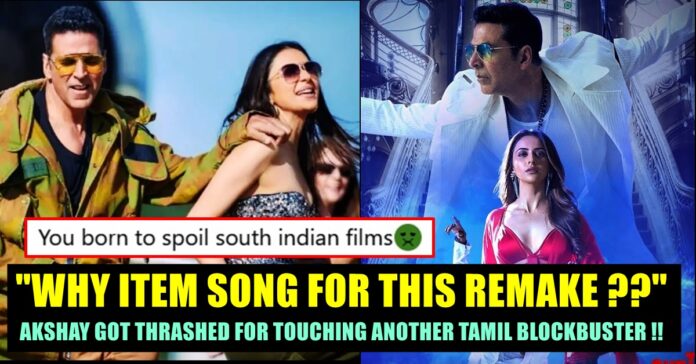 After seeing the promotional songs and videos from the upcoming Bollywood movie Cuttputtli, official remake of Tamil blockbuster film “Ratchasan”, fans of Tamil cinema who watched the original version has been venting their frustration out as the Vishnu Vishal starrer doesn’t require any duets or item numbers. Akshay Kumaris being called out for ruining the quality films of Tamil cinema as his recent flick “Bachchan Pandey”, remake of “Jigarthana” became a box office dud. 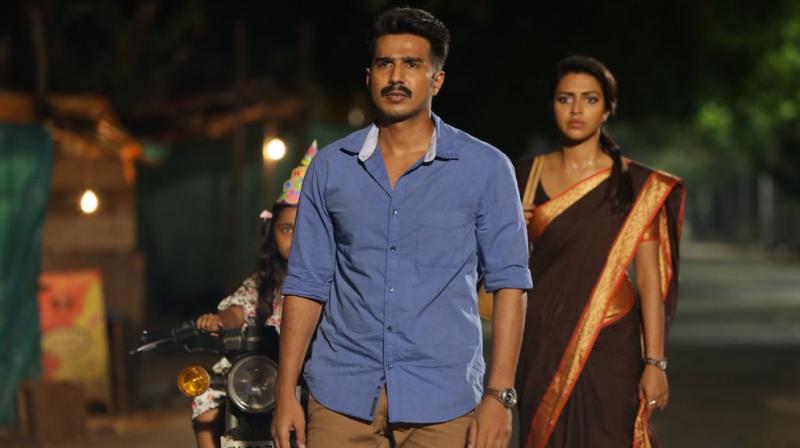 The film starring Akshay Kumar and Rakul Preet Singh is scheduled to hit the screens on 2nd of September. Directed by Ranjit M Tewari, the film is going to have a direct OTT release. Being the official remake of “Ratchasan” originally directed by Ramkumar. Akshay Kumar has been releasing the promo videos of the film in his social media timelines for the past few days.

“Play this song, before he plays with your mind! #Rabba song from #Cuttputlli out now” said Akshay Kumar through his caption.

Play this song, before he plays with your mind! #Rabba song from #Cuttputlli out now.

For another promo video which seemed like a duet song, the Bollywood actor wrote a caption that said “This one is going to get all the love birds grooving on its tunes like a #Cuttputlli!”

This one is going to get all the love birds grooving on its tunes like a #Cuttputlli!
Catch #Saathiya on @ZeeMusicCompany. Song out tomorrow! pic.twitter.com/gUHRYIOwC1

It is notable that the original version of the film didn’t contain a duet song and was a gripping thriller that had the audience in their seat edge. On seeing Akshay promoting the duet and item songs, a Tamil fan came up with a tweet writing “Why item song for #Ratchasan Hindi remake? Akshay Kumar is spoiling his reputation. Already BP was a disaster 🙁 Pls justify the need for remake” whereas anther one said “Why bollywood remakes fail. Ratsasan had no song, leave alone a club one. It had content and stupendous music which aggravated the suspense. And here we have a song in club that too when story is in missorie. Don’t need boycott gang to fail”

Why item song for #Ratchasan Hindi remake?
Akshay Kumar is spoiling his reputation.
Already BP was a disaster 🙁
Pls justify the need for remake

No wonder why Bollywood is stinking and sinking 😷

This is apparently the remake of #ratsasan ? https://t.co/iBsxqzQXCl

what is this? 😭
Raatchasan was a freaking thriller movie bro! https://t.co/TcsRxzpYNZ

This is a dance number for a Hindi remake of Raatsasan. Now I’m scared for Soorarai Pottru. pic.twitter.com/DVil8KqD6K

Never thought the Ratsasan remake could be so evil…..on the audience https://t.co/9ZFm2JNV3t

WTH is happening here? Raatsasan barely had any songs here already 2 force fit songs have been shown in #Cuttputlli https://t.co/V18cAKQVfM

Spoling the reputation of the original film! #Ratchasan was a class apart! This looks crass 👎 https://t.co/ANnhxhoTWy

#Cuttputlli – it’s original Tamil version and Telugu remake is available all over.

After few months, these OTTs will also say no to remakes!

Just came to know that this is Ratchasan remake. I wanna bang my head on a wall. How to delete this info from my brain. And how to unsee this. https://t.co/ehEiy8wYjj

Previous articleYouth Smiled At Camera After Setting A Girl On Fire !! Outrage Erupted
Next articleMovie Producer Called Out Book My Show App For Charging 25% Of Ticket Amount !!

“Educated Youths Are Not Coming Out” – Srimathi’s Mother!!

In a phone call interview with News 7, mother of student Srimathi who allegedly died due to the torture of her school teachers, had...