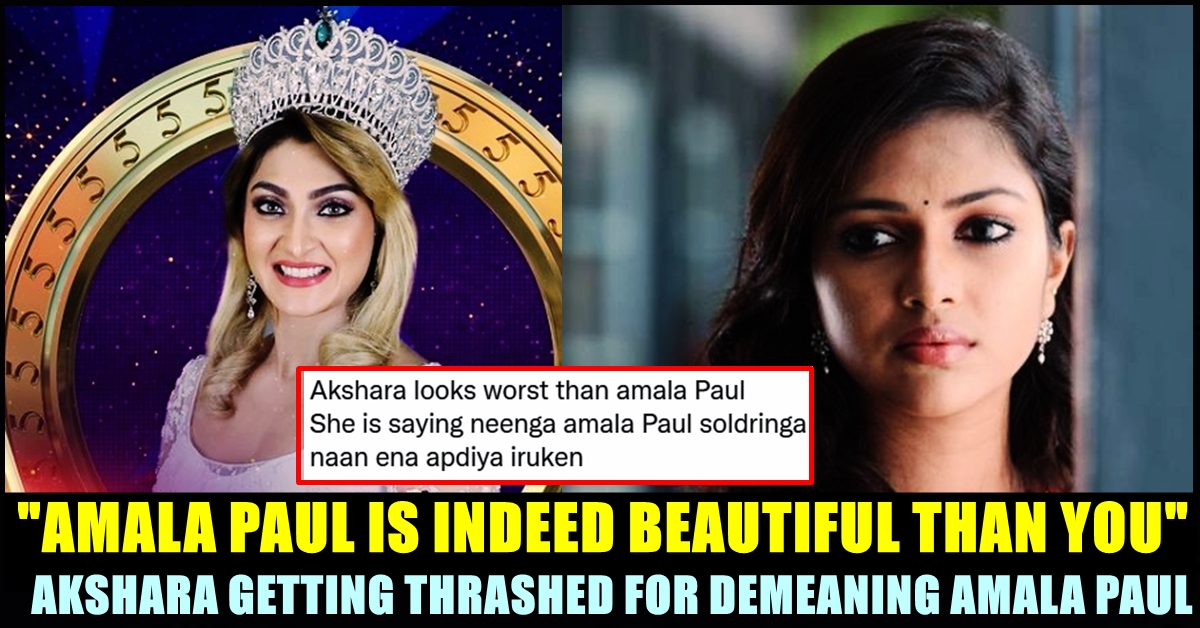 On the very first day of the 100 days reality game show, actress and model Akshara Reddy became the victim of online fans as she allegedly got caught demeaning South actress Amala Paul. In the show, She disagreed with Raju Jayamohan who compared her with actress “Amala”. Thinking that she was being compared with Amala Paul, Akshara expressed her displeasure and expressed her happiness after knowing that she is being compared with veteran actress Amala who paired with Rajinikanth, Kamal Haasan and many other top heroes during her prime time.

Season 5 of Bigg Boss got inaugurated on Sunday by Ulaganayagn Kamal Haasan with 18 celebrity contestants taking part in the show. Showing the newly renovated house, Kamal addressed the audience who were appeared in person this time in the auditorium, unlike the two previous seasons. He introduced the participants one by one by asking them tell about their profession, personal interests etc. In the inaugural episode which streamed for 6 plus hours, singing and dancing performances of the participants were also took place to entertain the audience, along with the contestants giving self introductions.

During a casual conversation, Raju Jayamohan compared the looks of Akshara Reddy with veteran actress Amala. Thinking that she is getting compared with actress Amala Paul, Akshara expressed her displeasure to him. After Raju clarified about which Amala he mentioned, Akshara Reddy said that she like Nagarjuna’s wife Amala very much and received the compliment of the Vijay TV star.

Fans who watched the show questioned Akshara why she has to demean Amala Paul who is known for her beautiful looks and versatile acting. “Akshara was not happy when she thought that the #Raju was comparing her with Amala Paul !! fair skin doesn’t make her look good” a twitter user said whereas another one said “Amala Paul is indeed beautiful than you akshara period #BiggBossTamil5 if u don’t believe pls see ur nose akshara” through his/her tweet.

omg why did akshara get offended that he compared her to amala paul???? wtf????? lmaoooo she is in sus list alr

When Raju was complimenting Akshara ad amala.
She thought its amala paul.
She find it as insulting to her .
🙄🙄
#BiggBossTamil5

#Akshara was not happy when she thought that the #Raju was comparing her with Amala Paul !! fair skin doesn't make her look good 👎#biggbosstamil5

Amala Paul is indeed beautiful than you akshara period #BiggBossTamil5 if u don’t believe pls see ur nose akshara https://t.co/GcVtS1xt2H

I have a doubt y akshara feels uncomfortable when raju said u looks like amala?#BiggBoss5Tamil

So #AksharaReddy is offended that she thought she was being compared to #AmalaPaul ? Seriously? IMO @Amala_ams has a much KaLaiyana face than Akshara. Also, what's wrong with #Raju ? Akshara no way looks anything like the #Amala of 90s. #BiggBossTamil5

Akshara looks worst than amala Paul
She is saying neenga amala Paul soldringa nu nenchen naan ena apdiya iruken
Worst akshara
Surprised to see none of the people calling her out for her comment on amala Paul.#BiggBossTamil5 #BBTamilSeason5

Being in cine industry talking low abt other actors in BB show. #raju ‘s comment abt Amala Paul not funny. She is more beautiful in her own way.