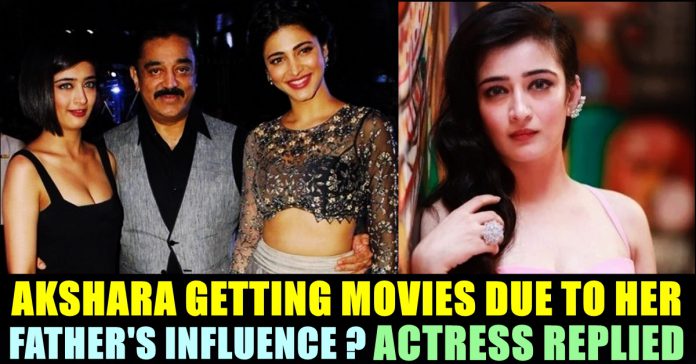 Cinema celebrities in India who entered the industry with their father or God father’s influence are being treated with so much hatred for fast few days, especially since the demise of 34 year old youth actor Sushant Singh Rajput who reached heights in Bollywood from scratch.

Now, for wishing her father on Father’s day, actress Akshara Haasan, daughter of veteran actor Kamal Haasan, pushed into a position to answer one of her follower who asked how Kamal helped her to enter the film industry. Akshara debuted to Tamil film industry through Vivegam and her stint in Bollywood’s Shamitabh gained her widespread acclaim. Akshara is a daughter of actors Kamal Haasan and Sarika Thakur, and the younger sister of Shruti Haasan.

On Sunday, Akshara came up with an exclusive picture of herself with her father and dubbed her father as a “Superhero”. She thanked him for being kind, warm and understanding. “You have always silently and not so silently picked both Akka and I up when we fell and helped us up through your advice filled with wisdom,” her message to her Father read. Akshara also thanked Kamal Haasan for teaching them (Akshara and Shruti) to stand on their own two feets and for making them as strong independent women today. “Hope to bring you more pride like you have with the world and us. Thank you bapuji. Love you bapuji.” Akshara wrote.

Happiest fathers day to my superhero bapuji.Thank for being the strong pillar of support, giving strength , for always being kind, warm and understanding. You have always silenty and not so silently picked both Akka and I up when we fell and helped us up through your advice filled with wisdom, helped us shine our brightest, when we shine you encourage us to shine more. You have taught us since we were born to be able to stand on our own two feet, and made us strong independent women today. Hope to bring you more pride like you have with the world and us. Thank you bapuji. Love you @ikamalhaasan bapuji.

This post from Aksara garnered as many as 72,000 likes from her 5 lakh followers so far. Along with the enormous number of positive reactions, this post of Akshara received few mean comments as well. One such comment from a user asked “With which production company kamal made you”

Unlike other celebrities who could have blocked, deleted or blasted at the user, Akshara kept her nerves and replied that she got her opportunities on her own merit. “none. Got opportunities on my own merit” wrote the actress with a smiling emoji. The user further said that he appreciates her for standing on her own and Akshara thanked him.

One more user advised Akshara to call her father as “Appa” instead of “Bapuji” as it is an emotion. Here’s how the actress replied :

The 28 year old actress who was last seen in Vikram’s Kadaram Kondaan is expected to be seen in “Moodar Koodam” Naveen’s “Agni Siragugal” soon. Comment your views in these replies of the actress !!

South Indian actor Vijay Devarakonda who is fondly called as "Rowdy" by his fans and followers, cleared the air about a report that surfaced...