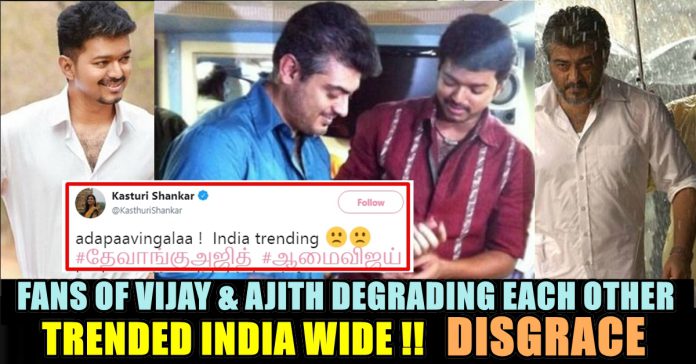 In psychology, there is a term called narcissistic personality disorder. It’s a common behavior exhibited by all, sometime or the other in their life where a person when criticized, show themselves absolutely incapable of retaining any emotional poise, or receptivity. And it really doesn’t much matter whether the nature of that criticism is constructive or destructive; they just don’t take criticism, period. They won’t mind going offensive to counter that criticism as well. 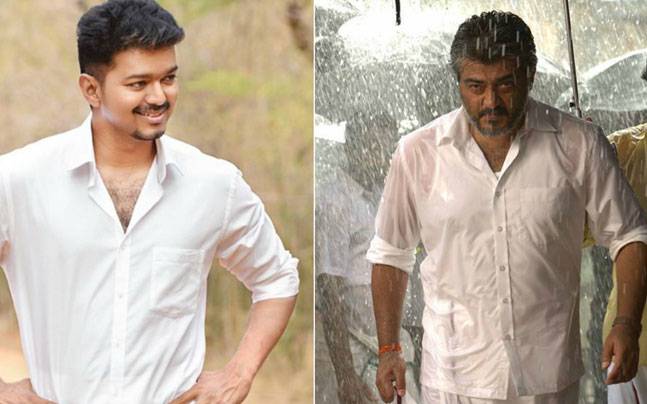 Yesterday to our shock, an act of a utter shame took place nationwide by both these actor’s fans. The Hashtags of #தேவாங்குஅஜித் and #ஆமைவிஜய் trended India wide in the micro blogging site.

If Tamils want others to take them seriously and claim to be different, stop going behind cine actors.

People who are trending #ஆமைவிஜய் & #தேவாங்குஅஜித் you guys need a life and not behind those actors.

Twitter users from north India started questioning about the hashtags which are written in Tamil which is really shameful.

#ஆமைவிஜய் what does it mean? Any tamilian please translate it for me….

Actress Kasthuri who is known for her controversial tweets also reacted to this disgrace.

This kind of negative fanaticism is not good for anyone- the fans as well as the actors . Thala #AjithKumar and Thalapathy #Vijay need to address this problem jointly. pic.twitter.com/0BruU522ms

Check out the reactions of the common people who felt really shameful of this act :

This two tags are such a disgrace to Kollywood 😓

Next time when you’re degrading each other by switching your nicknames, make the tag in English, so that the whole nation can come to know about the proud mentality of both actors’ fanbases.

British used to follow Divide and Rule policy in India. Likewise, today’s politician dividing Tamil people. If you are true fans of Ajith and Vijay must stay United to develop tamilnadu culture and country into glorious one. #ஆமைவிஜய் #தேவாங்குஅஜித் #entertainment #நாளைநமதே pic.twitter.com/TG2x9LS3c7

It is really disgusting witness such hatred among the fans of two great human beings.
Thala-Thalapathy, it’s a legacy. We will look back and we will smile. As is the case with legends such as MGR-Sivaji. It certainly feels good to take sides. But the recent trends of fans fighting in social media, theatres, in public and in private demand that we stop being narcissists. And start acting sensibly.

Previous articleThe Director Of “QUEEN” Tamil Remake Explains About The Controversial Scene In The Teaser !! Check Out !!
Next articleActor Siddharth Lets The Public Decide About His Next Project !! Check Response !!

A 7-year-old girl, who went missing on Monday evening, was found dead in Kasthurinaicken Pudur near Pannimadai in Thudiyalur on Tuesday. According to the...