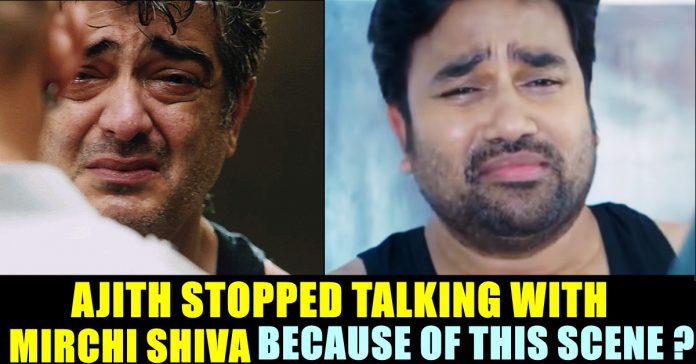 Actor Ajith kumar who is fondly called as “Thala” by his fans and Mirchi Shiva of Chennai 28 were in good terms for a very long time. Reports suggests that Shiva married to Priya, a cousin sister of actor Ajith on 15 November 2012. Actress Shalini and Priya are also sharing a strong bond with each other. Both the families spent quality times in the past and even went vacations together. However, a recent report had suggested that Ajith kumar stopped talking with Mirchi Shiva after seeing a scene from one of his films.

Being one of the leading actors of Kollywood, actor Ajithkumar enjoys a huge fan base in Tamilnadu. Despite of getting a humongous amount of love from his fans, Ajith refused to have fan clubs and dismantled it few years ago as he wants his fans to look after their families. This only increased the love of fans for him as they started admiring him more for his attributes. So far he had acted in 59 films and is currently working on his 60th project.

Throughout his acting career, Ajith kumar had gained a lot of friends and Mirchi Shiva was one among them. A recent report of Valaipechu had said that Ajith decided to cut ties with him after seeing his film Tamizh Padam 2. As said, both the families were in good terms and Ajith gifted Rs.50 lakhs to Mirchi Shiva and his wife Priya on their marriage.

During the making of Tamizh Padam 2, Richard, brother-in-law of Ajith kumar who is also a friend of director C.S Amudhan, came to know that a scene mocking Ajith is going to take place in the film. He informed about it to Ajith kumar, said Anthanan, a movie journalist. Ajith asked the film crew not to make such scene through Richard. However, actor Shiva and C.S Amudhan successfully shot the scene and it took place in the film as well.

“After seeing the scene in the film, Ajith got upset and stopped talking with Mirchi Shiva.” Andhanan said in Valaipechu youtube channel.

“Tamizh Padam-2” is a sequel of 2011 film “Tamizh Padam” which had Shiva in the lead role. In the sequel, the transformation scene of becoming evil from good in the movie “Vedhalam” which was widely loved by the fans was recreated by actor Shiva. The hilarious expressions of Shiva tickled the laughing bones of the viewers and the screenshot of the same scene is still being widely used to create memes.

The montage portion of “Vivegam” where Ajith would work out in a forest after getting severely attacked by antagonists was also imitated in the parody film of C.S Amudhan and Siva.

Samantha Responding To Rumours & Says Don’t Expect That To Me !!

Seemaraja is Sivakarthikeyan's 12th film. The actor’s films so far have made him a bankable star in Kollywood. While Velaikkaran could have been his...