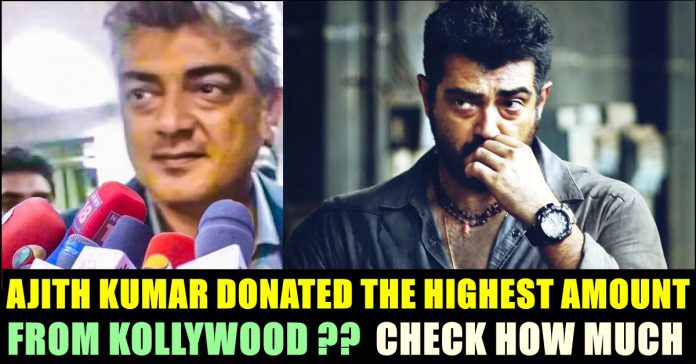 As many people came forward to donate to PM Cares and CM fund relief, to help them combat the deadly Coronavirus which is being a threat to the whole country, people from cinema industry and sports industry are also donating big sum of amount. Due to the 21 days lockdown, many industries are financially affected and the workers of it are suffering in big time. In a way of helping the people, many of the stars from film industry are coming forward to contribute their part.

Earlier actors Pawan Kalyan , Chiranjeevi, Mahesh Babu promised to donate Rs. 1 Crore respectively. Akshay Kumar announced a whopping amount of Rs. 25 Crores to PM cares which is the highest by any actor till today. Now, actor Ajith Kumar who has a biggest fan base has announced Rs.1.25 crores as donation, according to Puthiya Thalaimurai. This is the highest amount paid by an individual from Kollywood so far.

The actor reportedly provided Rs.25 lakhs for FEFSI workers and Rs.50 Lakhs for CM fund relief and Rs.50 Lakhs for Prime Minister relief fund. FEFSI has more than 20 unions, consisting more than 25,000 workers film technicians from different branches of filmmaking such as lightmen, makeup artists, choreographers, dancers, stunt persons, junior artists and others. Actors Sivakarthikeyan, Vijay sethupathi, Suriya donated Rs.10 lakh each for the people who are suffering from their industry.

In addition to the above mentioned amount, Ajith also provided Rs.2.5 lakhs for the PRO union. Being one of the leading actors of Kollywood, actor Ajithkumar enjoys a huge fan base in Tamilnadu. Despite of getting a humongous amount of love from his fans, Ajith refused to have fan clubs and dismantled it few years ago as he wants his fans to look after their families. This only increased the love of fans for him as they started admiring him more for his attributes. Ajith also avoided appearing in public events and in the promotional interviews of his own movies. Unlike other top actors, Ajith is not involving in any political issues.

The actor is currently shooting for “Valimai” directed by H.Vinoth and produced by Boney Kapoor. The film’s shoot has been interrupted due to Coronavirus pandemic. As soon as the news surfaced, fans of the actor are sharing the news in social media platforms.