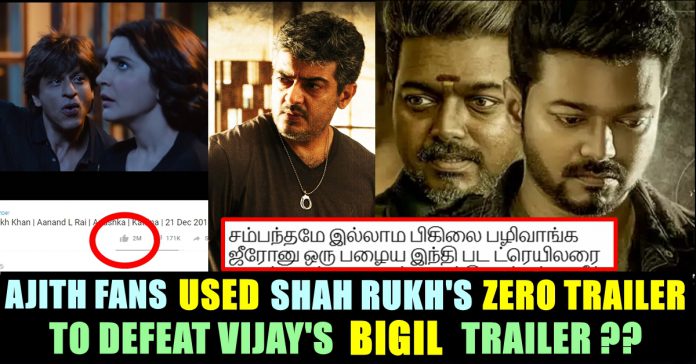 No words could describe the craze level that is being created by Bigil Trailer. Director Atlee, who himself a biggest fan of actor Vijay, carved the actor inch by inch it seems. The most awaited trailer of Bigil released on Saturday and left the Internet in explosion. The film which marks the third collaboration of Atlee and Vijay, has actor Vijay in the lead in three different get ups.

The trailer ticks all the boxes of the expectation list of a Vijay fan. Looking like a emotional action drama, Bigil trailer promises an absolute treat for the fans who are waiting for it since past one long year. Within 3 days since release, the trailer of Bigil reached 2 million likes and became the second most liked trailer in India after Shah Rukh Khan’s “Zero” trailer.

Now the reason behind Bigil becoming the second most liked trailer instead of becoming the first ever to reach 2 million likes has been revealed. The trailer of Shah Rukh Khan’s “Zero” released on the 2nd of November in 2018. When Bigil trailer released on Saturday, the likes of “Zero” trailer were around 1.8 million and it was seen receiving more than 120 million views.

As soon as the trailer of Bigil released, fans of actor Ajith Kumar who is considered as the rival of actor Vijay, started liking the trailer of Shah Rukh Khan-starrer, to restrict Bigil from becoming the first to reach 2 million likes. This is evident through some posts which surfaced in the social media platforms.

Check out some of the tweets here :

Yeah it crossed but later it fell down to 1.9 and Ajith fans today started to like it and it reached again to 2M so that Bigil couldn't be the first one. But Zero did 2M way before.

What!!!! Seriously this Fan fights are leading to some psychological disorder. Some actions should be initiated by both of the actors ASAP. https://t.co/HNl2N2Z7Qz

Produced by AGS Entertainments, Bigil has Nayanthara as lead lady. Kathir, Vivek, Yogi Babu, Indhuja Ravichander, Jackie Sheroff, Daniel Balaji are some of the other actors taking part in the film. On the other hand, Ajith Kumar is all set to appear as cop in his next which is tentatively titled as Thala60. The film is going to be directed by H.Vinoth who directed Ajith in his previous venture Nerkonda Parvai.

Previous articleFan Blamed Indian Captain Mithali Raj For Not Speaking In Tamil !! She Gave Him Back In Style !!
Next article“Please Respect Us” Vikram Fan Not Happy With Actor Vivekh !! Check His Reply !!