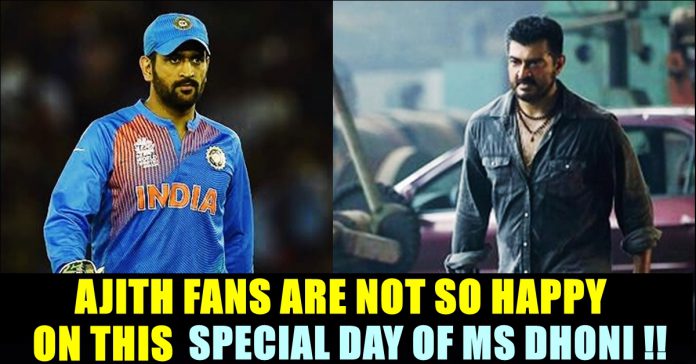 Ajith Fans Are Not So Happy On This Special Day Of MSD !!

Indian former captain Mahendra Singh Dhoni turns 39 today and the entire country is wishing him the best. The inspirational icon who motivated a generation of youngsters to follow their dream, has a huge fan base across the country. Dhoni, who made his international debut in 2004 in an ODI against Bangladesh, has so far played more than 500 international matches for India becoming only the third Indian cricketer after Sachin Tendulkar and Rahul Dravid to do so.

Being the only Indian captain to win all the ICC trophies, MS Dhoni is considered as a selfless cricketer and known as a team player. One of the best examples is, Dhoni voluntarily stepped down from captaincy two years prior 2019 world cup and made Kohli to lead the team. The Jharkhand cricketer said that Kohli needs enough time to practice as captain to lead the side in the world cup tournament. However, India failed to win the cup by losing a crucial semi finals match against New zealand.

Coming from a middle class family, Dhoni achieved so many things and now became one of the richest sports personalities in the world with his sheer hard work. In IPL, MS Dhoni is captaining the Chennai team and made the team win trophies three times. On this special day, many people wishing the legend to have a healthy future.

Marking the date you were born, another year older, greyed a bit more, become smarter and sweeter. (Literally 😂😂) You are a man who will not be moved by all the sweet wishes and gifts. Let’s celebrate another year of your life by cutting a cake and blowing the candles! Happy Birthday, Husband!!

Now, through several number of posts and comments, Ajith fans are expressing their disappointment over Dhoni being called as Thala. “There is only one Thala and that is our Ajith” is what they are claiming through their posts. They started trending a hashtag “Andrum Indrum Oreyy Thala Ajith” to prove their love towards Ajith. Check out some of their comments below :

#Thala Title was Not stolen From Anyone Like @actorvijay .

This Title was Given By #ShankarMahadevan Stunt Master. He is The person Who used #Thala Term in #Deena Movie #அன்றும்இன்றும்என்றும்ஒரே_தலஅஜித் #Valimai

Planned to watch #ThalaAjith movie #Valimai with friends in Agscinemas, Tnagar now nomore movies in AGS cinemas. #HappyBirthdayDhoni is a brilliant captain the cricket world never produced but he is #CaptainCoolDhoni not #Thala.

Comment your views on these reactions from the fans of actor Ajith kumar !!

Previous articleWhen Ajith Got Upset With His Wife Shalini !! WATCH
Next article“Not Rajinikanth, Vikram Is The Superstar” Says This BIGG BOSS STAR !!

Meera Mithun got eliminated from Bigg Boss Tamil season 3 last week. She was one of the most controversial contestants in the house. The model-actress...

Actor Shanthanu who was last seen in Vijay's "Master" replied to a meme which trolled him. The actor who is pretty much active in...