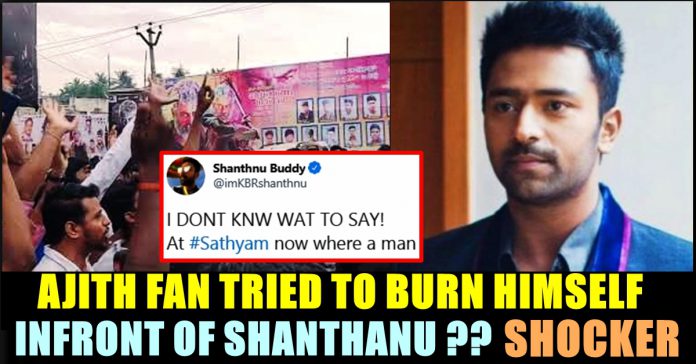 OMG 🙆🏻‍♀️ What a celebration🍾🥳

Everything is a matter of desire and joy, until it reaches beyond the limit. We have seen fans damaging theatre properties when they couldn’t get the tickets they wanted on the first day of the movie’s release. But this one particular fan went one step ahead and tried to burn himself due to some ticket issues, according to a tweet of actor Shanthnu.

Shanthnu, in his tweet reported that the fan was searching for a matchstick to burn himself due to some ticket issues for Ajithkumar starrer Nerkonda Parvai. The tweet he posted said “I DONT KNW WAT TO SAY!
At #Sathyam now where a man RIGHT NXT TO ME was bathing in petrol&searching fr a matchstick to burn himself bcz of sme ticket issue for #NKP
#THALA or any othr STAR will def not encourage this! It’s ur life against a movie ticket Police have arrested him nw”

I DONT KNW WAT TO SAY!
At #Sathyam now where a man RIGHT NXT TO ME was bathing in petrol&searching fr a matchstick to burn himself bcz of sme ticket issue for #NKP#THALA or any othr STAR will def not encourage this!
It’s ur life against a movie ticket
Police have arrested him nw 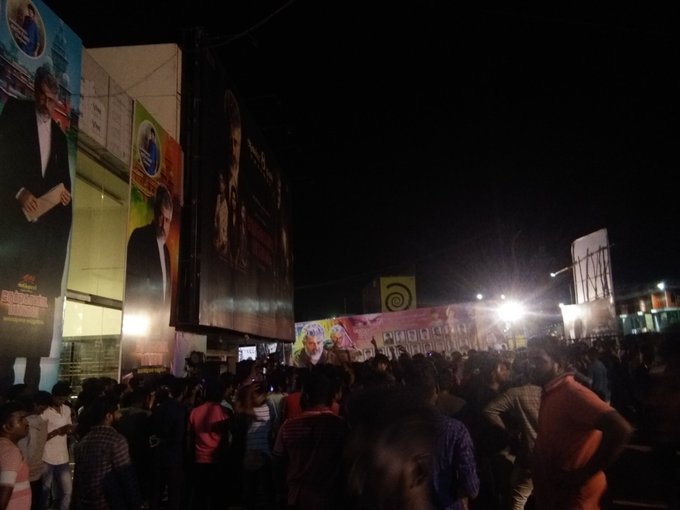 Being a hardcore fan of Thalapathy Vijay himself, Shanthanu could not believe this activity of a fellow movie watcher. Popular anchor Anjana who couldn’t believe the news, confirmed it by commenting in his tweet.

This is indeed not a right a way to approach a movie. Youngsters who follow actors must know their limit in showing their affection towards the star. Meanwhile the film is getting massively positive response from the reviewers who watched the film in preview show. They labelled the film as the need of the hour. On the profession front, Shanthanu, who was last seen in Mupparimanam (2017), has signed his next with Madha Yaanai Koottam director, Vikram Sugumaran. Titled Raavana Kottam, the film was shot in a village near Ramnad lately. “It’s a new backdrop for me. The producer and director opted for me because they wanted a ‘namma ooru paiyan’,” said the actor.

What do you think on these kind of  activities from Fans ?? Comment your views below !!

A flash strike by the crew of the Metropolitan Transport Corporation (MTC) over the payment of salary early on Monday left thousands of city...