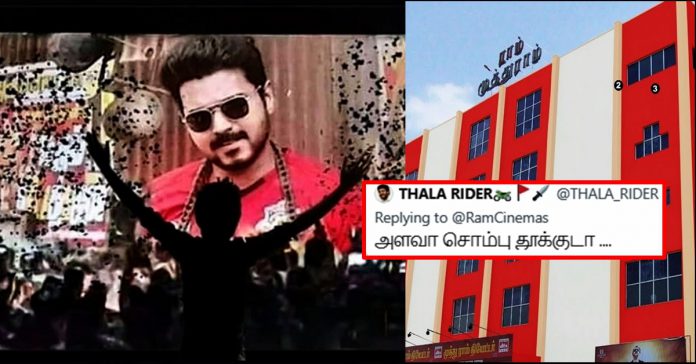 BIGIL is the latest released Vijay movie in which the actor played the role of a captain of his football state team and as a coach of a state football women’s team. He also essayed a role of an aged gangster which was never done by the actor before. The film released two days prior to Diwali day and is running successfully across the world.

The sports-drama collected a whopping Rs 200 crore worldwide at the box office in just five days. At the end of one week of its theatrical run, the film has grossed more than Rs 100 crore in Tamil Nadu alone.

Bigil has recently completed one week of its theatrical run and has stepped into week 2 with much fervour. The box office collection saw a minor dip during the weekdays, however, the advance bookings for the weekend looks promising.

On seeing this post, one of a twitter user whose twitter handle denoted him as a Ajithkumar” fan abused the theatre owner and posted a disrespectful comment. As he seems to have deleted his reply now, Check out the screenshot of his comment below :

On seeing this comment, the theatre owner who got dejected decided to put a full stop for these kind of abusive comments. He posted a picture of Ajithkumar from Vedhalam movie and requested the fan to let him do his job peacefully.

“When your favourite hero’s movie released, we enjoyed it along with you. Now when other hero’s movie gets a release, why such hatred ?? I request you to let us do our job. It takes 0.5 second to spread hatred but as Thala said Live and Let live” said the theatre owner in his reply.

Ram cinemas which is located in Tirunelveli is known for its friendly social media interaction with its followers. Recently when a fan warned him to take care of the theatre screen, he posted picture of a set of bouncers to warn him which went viral in social media. Fan Warned Theatre Owner To Keep His Screen Safe During FDFS Of BIGIL !! Check Out The Reply He Received !! What do you think on this reply of Ram cinemas ?? Comment your views !!