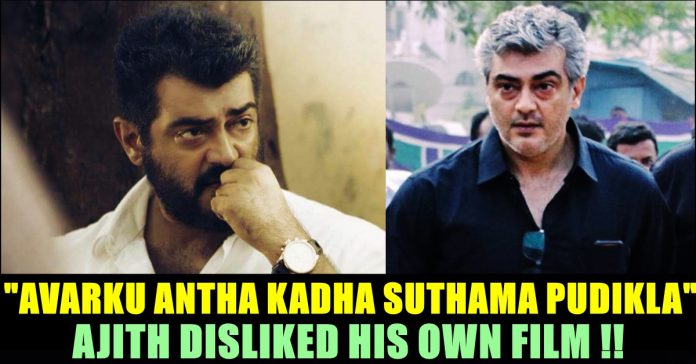 Ajith Acted In This Movie Of Him Without Belief !! WATCH !!

In a recent interview with director Chithra Lakshmanan, director Linguswamy has revealed that Ajith didn’t like the idea of acting in his film “Ji” which was released in 2005. Being one of the leading actors of Kollywood, actor Ajithkumar enjoys a huge fan base in Tamilnadu. Despite of getting a humongous amount of love from his fans, Ajith refused to have fan clubs and dismantled it few years ago as he wants his fans to look after their families. This activity of the actor only increased the love of fans for him as they started admiring him more for his attributes.

Linguswamy is one of the leading filmmakers of Kollywood film industry. The director made many notable films such as Run, Sandakozhi, Paiya, Vettai etc. The filmmaker was last worked in the sequel of his earlier hit Sandakozhi. Now the filmmaker has appeared in an interview after a long time. In the interview, Linguswamy shared about many of his experience during the making of his films. The interview was hosted by experienced actor and filmmaker Chithra Lakshmanan. The director who spoke his heart out in the interview shared how he worked with few of the top actors and directors of the industry.

Linguswamy has said that he thought of making the movie “Ji” by having Siddharth or Madhavan in the lead role. “I never thought of making the film with Ajith sir” the director said. “After the production house bought his call sheet, I asked Ajith sir to grow beard naturally and asked him to reduce weight as it is a character of a college student. I also wanted to shoot in real locations. But Ajith sir didn’t have the belief” he added.

Further Linguswamy added that Ajith listened to the story of “Ji” only the day before the shooting. “He didn’t like the story. He genuinely said that he didn’t like the story. Though my assistants are excited on having Ajith as lead, I felt that the story doesn’t require a personality like Ajith. I kept thinking about the fact that he is not looking like a student.” he said in the interview.

“Ajith even asked the producer to leave the project and to do another film with a different story. However producer Chakkravarthy convinced both of us to finish the shooting.” the “Sandakozhi” filmmaker said. “He blindly believed me and cooperated with me completely. The film’s failure belongs to me” he added in the interview. As Linguswamy and Ajithkumar predicted at that time, the film didn’t impress the audience and failed to make an impact in the box office.

Today Ajithkumar is one of the most sought after actor in the industry. Not only fans, even people from his own industry also admires him for his works and personal characters. Actors like Simbu, Anirudh, Nazriya are few of the many actors who admires Ajith Kumar as their idol.

WATCH : Top Heroines Got Stunned On Seeing This Unseen Video Of Samantha !!

Actress Pranitha Subash is known among Tamil audience for pairing up with Suriya in Venkat Prabhu's "Mass"  and with Karthi in his "Saguni", announced...