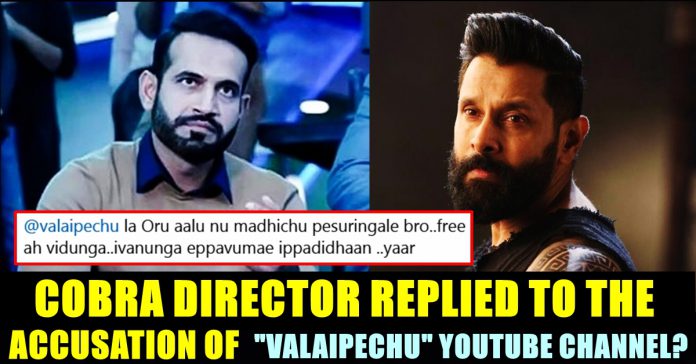 Director Ajay Gnanamuthu’s most recent tweet about “digging a grave” for others created various kind of speculations in the social media platforms. Most of the fans who are following the filmmaker in the micro blogging social media site believed that he posted the tweet to reply the movie journalists of “Valaipechu” youtube channel who stated about the filmmaker disappointing “Cobra” producer due to his “lack of planning”.

Ajay Gnanamuthu debuted to Tamil film industry through “Demonte Colony” and the film became a huge blockbuster among the Tamil cinema audience. His second venture “Imaikkaa Nodigal” with Nayanthara and Anurag Kashyap also did well in the box office. Now, he is busy directing actor Vikram for “Cobra” and is introducing cricketer Irfan Pathan as an antagonist. The film’s teaser released lately and garnered huge response from the actor’s fans.

watch the teaser below :

Now, a video uploaded by “Valaipechu” youtube channel with a title saying “Kobathai Erpaduthiya Cobra Iyakkunar”, (“Cobra” director caused the anger) has caused reactions in twitter. Bismi, one of the three journalists said that the budget of “Cobra” film exceeded its limit due to Ajay’s lack of planning. “After realizing the fact, he (Ajay Gnanamuthu) accepted to give back Rs. 1.5 crore from his salary to producer Lalith kumar” Bismi said in his video.

“Lately, the director said that the film will be completed after 35 days of shoot. Now, after completing the schedule, he again asked for a 30 days schedule to complete the film and the producer got shocked on hearing about it” said Bismi. “Lalith got upset and expressed his anger towards the filmmaker as the actors including Vikram went for the shooting of other films.” he added.

As soon as the video from the youtube channel surfaced, Director Ajay Gnanamuthu uploaded a tweet in his official twitter account through which he enjoys 70 thousand plus followers. “If you dig a grave for others, you might fall into it yourself” the picture he added said and Ajay added a caption to it writing “To whom so ever it may concern!!”

To whom so ever it may concern!! 👍🏻👍🏻 pic.twitter.com/uGG4RIMMuq

Replying to this tweet of him, many followers slammed the members of Valaipechu youtube channel. Check out some of their reactions below :

Dear @valaipechu … This is for yu

Comment your views on this tweet of the filmmaker and the reactions he is receiving for it !!