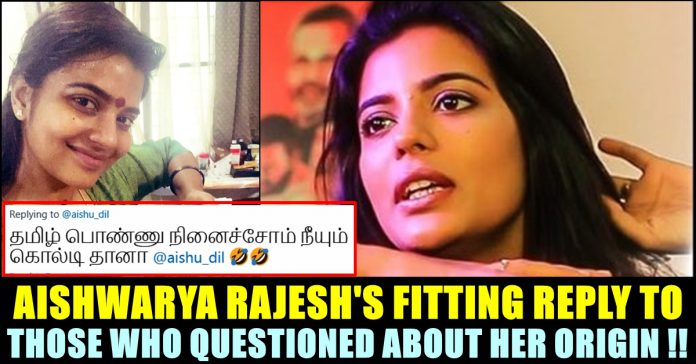 On March 25, when actress Aishwarya Rajesh uploaded a photo of herself to wish her followers for Ugadi festival, many followers of her from Tamilnadu expressed their disappointment. The actress uploaded the photo with a caption saying “Sarvari Nama Ugadi Subakankashalu…”

“We thought you are a Tamil girl” said one of a follower whereas another one wrote “These people are dominating Tamil cinema” in a way of spreading hatred. Check out some of the reactions below :

She s not Tamil, born in Andhara . Grown up in chennai…waste piece

To this post, an offender who most probably could have seen the previous post of the actress, replied to her post by asking “Neenga thelugu thana..”

Unlike other celebrities who could have just ignored or slammed back the offender severely, Aishwarya Rajesh kept her nerves and tried to make him understand that it doesn’t matter if she is a Telugu or Tamil to wish people on a special day. “how does it matter if am tamil or telugu … have a great day.” the “Kanaa” actress wrote and received nearly 400 likes for her reply so far.

how does it matter if am tamil or telugu … have a great day.

This reply also getting positive response from her followers. There can be no denying that Aishwarya Rajesh is one of the most talented and promising young stars in Tamil cinema today. In just a handful of years, she has carved a niche for herself thanks to her mature performances, charming personality and warm/amicable nature. Her performances in films such as Vada Chennai, Kaaka Muttai are considered as few of the best performances of her career.

On the work front, the actress who was last seen as a lead in “Kanaa” , a female centric sports film, Aishwarya Rajesh is all set to appear in Ka Pae Ranasingam as lead. Comment your views on the reply made by the actress !!

Former Bigg Boss contestant, actress and BJP politician Gayathri Raguramm slammed Dindigul Leoni for a speech he made while campaigning for DMK party. The...

Madhavan To Act As Father For This 29 Year Old Actor ?? Check His Reply !!

Actor Madhavan is super active in twitter which is making his fans super happy. Having around 27 Lakh followers, Madhavan has been interacting with...

BJP's S.Ve Shekar has posted a tweet saying that Rajinikanth's political party workers are working equal to the workers of BJP party in this...