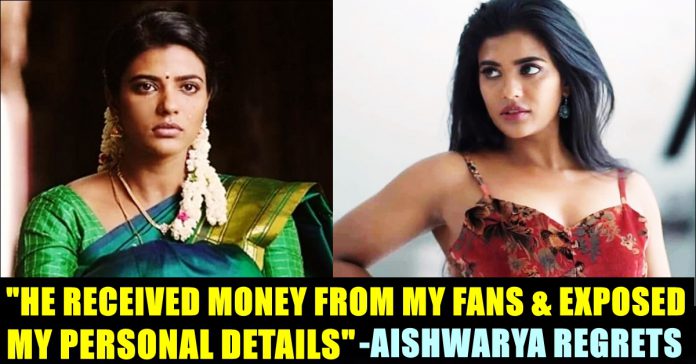 Aishwarya Rajesh Cheated By Her Own Assistant ?? WATCH

In one of her recent interactions with media, actress Aishwarya Rajesh has revealed how she got cheated by her own assistant whom she believed a lot. The Vada chennai actress disclosed about it while talking about the struggles being faced by the heroines in film industry. She worried that she couldn’t figure whom to believe and whom not to after the incident.

It may look that actress Aishwarya Rajesh rose to fame in Tamil film industry within a short span of time but the struggles she faced to reach the height is immense. After Nayanthara, Aishwarya Rajesh is the only heroine in Tamil film industry who manages to get opportunities to play lead role in female oriented movies. Earlier, the actress said that she is currently working as lead actor on 6 to 7 female oriented movies after the success of her “Kanaa”. Aishwarya Rajesh was brought up by her single mother as she lost her father when she was 8 years old.

After doing minor roles in films such as “Attakathi”, “Puththagam”, Aishwarya Rajesh rose to fame after appearing in Manikandan’s “Kaaka Muttai”. Before her movie stint, she was a television presenter in a comedy show called “Asatha Povathu Yaaru?” on Sun TV and was a participant of Manaada Mayilada dance reality show.

After the success of “Kaaka Muttai” in which Aishwarya appeared as a mother two grown children, she got the opportunity to play lead in Vettri Maaran’s Vada Chennai who is one of a producers of Vada Chennai. Now, her film “Kanavar Peyar Ranasingam” is gearing up for OTT release and the actress is acting in few more female centric movies.

In this recent interaction with Vikatan, while talking about the struggles being faced by heroines, Aishwarya Rajesh said that the actresses are being cheated by a group of fraudsters who are claiming themselves as filmmakers. Aishwarya said that the fraudsters have approached actress Andrea with whom she became friends during “Vadachennai” times.

“They told her that it is a “Web series”, “Web film” which has Vijay Devarakonda in the lead role and confused her. Later we came to know that it is a scam. They approached a number of heroines by claiming the same. They even met heroines. When she (Andrea) was telling me this, I got shocked” said Aishwarya who went on reveal how her assistant betrayed her.

“They are taking actresses for ranted. Even it happened to me. An assistant who was working with me, bought money from my fans and was kept updating about my whereabouts. He gave them the lock number of my house. We couldn’t determine whom to believe and whom not to” she said in the interaction.

“He was working with me for one and half years.” Aishwarya worried. “People asked me to file case against him. But I just want him to stop doing it to anyone else in future. I worry about woman safety. I still regret on the fact that he was a boy whom I trusted the most” Aishwarya Rajesh said.

Previous articleDesign Of This Popular Magazine Irked Ajith Fans !!
Next articleVaaranam Aayiram “Meghna” Replied To This Recreation Of Fans !!

Guy Tried To Troll “MANKATHA” Director Venkat Prabhu !! Check How He Handled Him !!

As we all know, Director Venkat Prabhu has a special bond with Ajith Kumar, one of the top actor in Kollywood. They both are...

Along with Politicians and public, many of the influential personalities from Tamil film industry reacted to the release of Perarivalan, a convict in the...

Nearly two weeks after the much awaited second season of Bigg Boss Tamil, the popular reality TV show that was all the rage last...