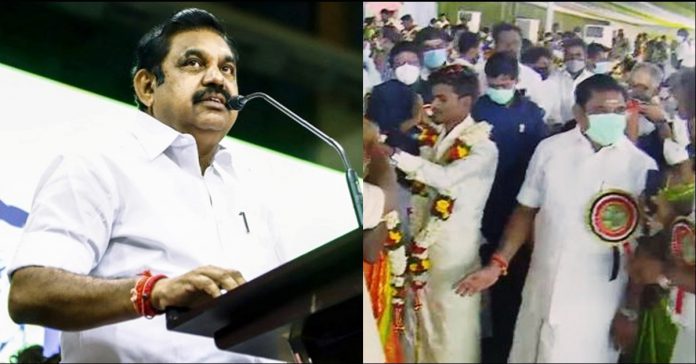 Ahead of the 73rd birthday of Late chief minister J. Jayalalithaa, marriage ceremonies were conducted for 123 couple with ADMK offering 73 set of gifts for the couple at Perur Chettipalayam, Coimbatore. At special event, while delivering his speech, Chief minister Edappadi K Pazhaniswamy said that the massive event is a prime example to prove that AIADMK is a political party that functions beyond caste and religion.

“This marriage stage is a prominent example to prove that AIADMK is a party beyond caste and religion” said Chief minister Edappadi K Pazhaniswamy. “ADMK is the only party that conducts this kind of event every year. Marriage events are being conducted every year to celebrate late chief minister J. Jayalalithaa’s birthday” he added.

He further stated that several schemes to improve the lifestyle of poor and needy are being progressed. “To start a new business, we offer variety of offers. Tamil nadu is the state which garnered highest number of awards in the country.” Cheif minister Edappadi K Pazhaniswamy said and advised the married couples to lead a successful life by sacrificing each other.

Deputy Chief minister O. Panner selvam, during his speech, lauded the governance of Cheif minister Edappadi K Pazhaniswamy and said that his ruling is on par with Former chief minister J Jayalalithaa.

Previous articleJUST IN : Ajith Kumar Answered To His Fans On “Valimai Update” !!
Next articlePrithi Ashwin Celebrating Her Husband’s Century In Style !!