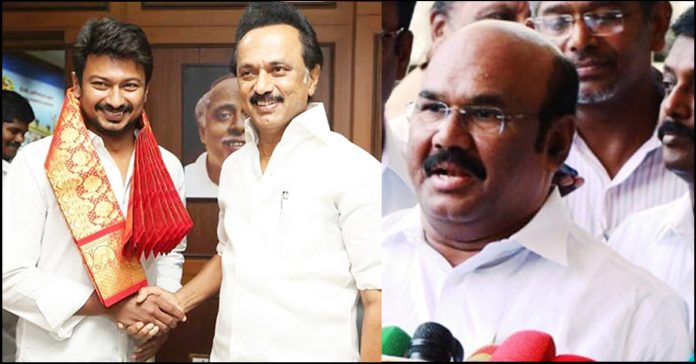 The members of AIADMK alleged that DMK has been involved in distributing money through Google Pay and demanded the elections in the above mentioned constituencies to be countermanded.

Minister Jayakumar, while interacting with the reporters, alleged that MK Stalin’s wife Durga Stalin has been distributing Rs. 10,000 each per women’s self help group in Kolathur. The AIADMK members accused that the DMK party members are paying Rs.5.000 to every individual through G-pay in Kolathur constituency. They demanded the election commission to cancel the candidature of election commission.

The AIADMK members accused the DMK cadres of distributing money ranging from Rs.2,000 to Rs.5,000 to the voters since 1st of April, in the Chepauk-Triplicane constituency where Udhayanithi Stalin is contesting. They also stated that Rs.5,000 is being paid to voters through G-pay and demanded stringent action against Udhayanithi Stalin besides cancelling his candidature.

The petition also demanded the cancellation of the candidatures in other three constituencies. In another petition, the ADMK has accused Sun news channel of repeatedly telecasting the banned videos, clippings and footages and of violating the model code of conduct. The AIADMK wanted Election commission to issue a gag order to stop the telecast of the banned videos and footages in the Sun news channel.

Previous articleAbhirami Replied To People Who Commented On Her “Bust Being Big” !!
Next article“CWC” Fame Dharsha Gupta Got Emotional & Shed Tears On Seeing The Memes Against Her !! WATCH

Shankar Planned To Direct Rajinikanth In “Traffic Ramasamy Biopic” !! : But S A C Disappointed He Says !!

It’s a well-known fact that SA Chandrasekar is acting in the upcoming biopic on the controversial social activist Traffic Ramasamy. The makers have already released...

A video that shows Myna and Ayesha talking about Manikandan using a shoe that has Bluetooth connectivity is trending among the followers of the...