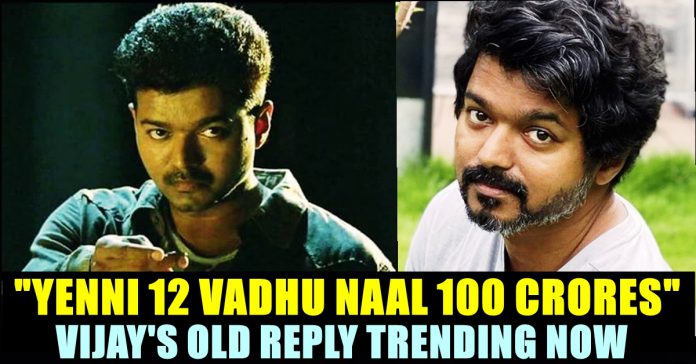 Online fans of Tamil actor Vijay are celebrating the 6th year anniversary of his blockbuster film “Kaththi” which was released on 22nd of October in the year 2014. They are planning to trend a hashtag nationally and are preparing a common dp to celebrate the film which was directed by A.R Murugadoss. The film marked the second collaboration of the duo after their first film “Thuppakki” which became a huge break in the acting career of actor Vijay. As a part of this celebration, an old reply of Vijay to a fan during the release time of “Kaththi” is trending in the micro blogging social media site.

Having worked in films like Gilli, Theri, Kaththi, Jilla, Puli, Sivakasaki, Vaseegara, Nanban and Kuruvi among others, Vijay is one of the most revered stars in the Tamil film industry. The actor’s last seen in Atlee’s Bigil. Before that, he acted in a film named as “Sarkar” directed by AR Murugadoss, and co-starring Keerthi Suresh was a blockbuster and created big time controversy as well.

Having a loyal fan following in all age groups, Vijay always suggested his fans to ignore negativity. His fans backed the actor during his hard times. Be it a release problem or bad reports, Fans of the actor never failed to stand with the actor. He is also one of the very few Indian actors who is facing problem in releasing almost all his films.

During “Kaththi” release, makers of it faced a number of controversies including the plagiarism accusation of director “Aramm” fame Gopi. The film became the second production venture of Lyca productions. Due to the production house’s Sri lankan background, the film faced political issues. After so many struggles, the makers of it managed to release the film in theatres and it became a huge hit.

When the film was running in theatres, Vijay conducted a question and answer session in Twitter. While replying to a fan, the actor wrote “They said that the film won’t get a theatrical release. They even broke the windows of theatres. They didn’t give tickets till 12. On the 12th day from the release, they said that the film collected 100 crores” resembling a popular dialogue from “Thuppakki” movie.

Now, as a part of the film’s 6th year anniversary celebration, fans of Vijay are trending this screenshot along with the achievements reached by the film. Check out some of their tweets below :

Kaththi is a film which had Vijay in dual roles. The film talked about the struggles faced by the farmers of Tamil nadu’s rural areas. It also created a debate in the society regarding the dominance of corporate companies in the villages of the Tamil speaking state.

When Vijay was asked why he acted Coca cola advertisement if he feels they are ruining the farming resource of Tamil nadu, the acted said that he is also learning from his mistakes like every other human.

Check out the answer provided by him at that time :

Comment your views on fans celebrating the 6th year anniversary for Kaththi !!