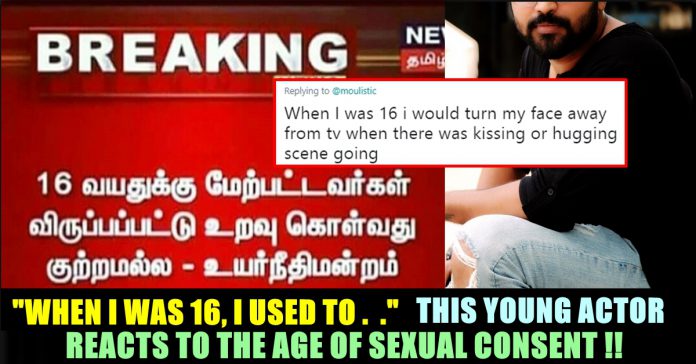 Age Of Sexual Consent Reduced To 16 For Girls !! This Young Kollywood Actor Reacts !!

Consensual relationships between teenagers aged between 16 and 18 years should not come within the purview of the Protection of Children from Sexual Offences (POCSO) Act, and that a child should be redefined as someone below 16 years of age, instead of the current 18, the Madras High Court observed on Friday.

Setting aside the 10 years rigorous imprisonment awarded by a trial court under the Protection of Children from Sexual Offences (POCSO) Act, the Madras High Court has made an observation that has far-reaching consequences.

Presently, sexual relations with a person below the age of 18 would constitute a statutory sexual offense under the POCSO Act. The punishment for such an offense includes rigorous imprisonment.

“Any consensual sex after the age of 16 or bodily contact or allied acts could be excluded from the rigorous provisions of POCSO Act, and sexual assault could be tried under more liberal provisions which can be introduced in the Act, differentiating sexual assault and teenage relationships,” Justice V Parthiban of the high court, observed.

On seeing the news, popular Tamil actor Chandramouli who is known for his film “Kayal” directed by Prabhu Solomon, posted his opinion in a funny manner. In his tweet he wrote “Age of Sexual consent to be lowered to 16: Madras High Court. When I was 16 I used to ask permission to make a phone call from landline. 🤷‍♂️”

Age of Sexual consent to be lowered to 16: Madras High Court.

When I was 16 I used to ask permission to make a phone call from landline. 🤷‍♂️

He also received humorous reactions from his followers for this tweet :

When I was 16 yrs I used to see Dora buji and sing along with dora.🤣😂

When I was 16 I used to play video games, kannampoochi , pambaram , seven stones … 😌😌

The case was filed by the grandparents of the girl, accusing the youth of abducting her. Bur during the trial, a number of witnesses, include the girl turned hostile and told the court that she went with the accused on her free will.

What do you think on this verdict and the actor’s statement regarding it ?? Comment your views below !!