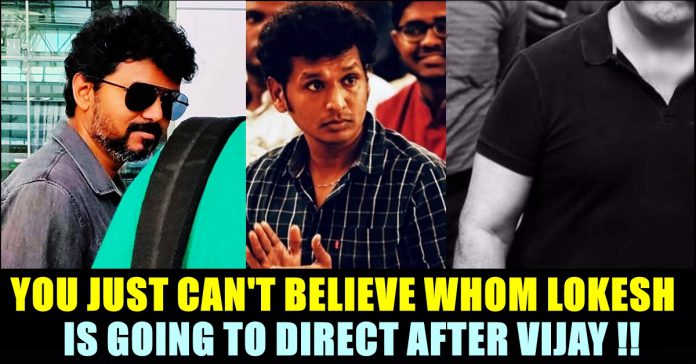 Lokesh Kanagaraj is the most happening filmmaker of Kollywood right now. Having directed just two films so far, he impressed both audience and critics with the brilliance of his work. His recent film “Kaithi” released along with “Bigil”, one of the highly anticipated film of the year but is running successfully across the theatres in Tamilnadu.

In his directorial feature debut, in 2017, he released the thriller Maanagaram, which performed well at the box office. He wrote the script and directed, describing the story’s structure as “hyperlinked” subplots. It has Sundeep Kishan, Sri, Regina Cassandra, Madhusudhan Rao, and Charle as the main cast.

The film which is tentatively titled as Thalapathy 64, has Anirudh Ravichander as music composer and the film includes actor Vijay Sethupathi as the antagonist. Shanthanu, Antony Vargheese, Malavika Mohanan are some of the other actors who are the part of this film. As the fans of Tamil cinema are not relieved from the awe of the director’s growth, the next update about his directorial venture shook the Internet.

The filmmaker is an ardent fan of actor/director Kamal Haasan which he said in many of his interviews. He even said that Kamal Haasan’s Virumaandi is the inspiration for his Kaithi. Now the recent update informs us that he is going to direct his idol Kamal Haasan as his next and the reports suggests that he signed it with Kamal’s own production house Raj Kamal Internationals.

According to a report by Tamil weekly Vikatan, Raaj Kamal Films International has reportedly signed Lokesh and has paid him a token amount as advance. Famous youtube channel, Valaipechu also reported about the same.

As soon as this news surfaced on Internet, fans of the actor are celebrating it as they are aware of Lokesh’s admiration towards Kamal Haasan. Kamal Haasan, on the other hand, is busy shooting for Shankar’s Indian 2. The film, a sequel to Indian, will mark the return of Haasan as nonagenarian vigilante, Senapathy. Indian 2 also stars Siddharth, Kajal Aggarwal, Rakul Preet Singh and Priya Bhavani Shankar.

What do think on Lokesh directing Kamal Haasan ?? Comment your views below !!

Main Reason Behind The Rumour Of UAE Donating 700 Crores To Kerala REVEALED !!

The Indian government has categorically stated that it won’t be accepting any foreign aid for the purpose of rebuilding Kerala that is experiencing the...

Bill Gates, co-founder of Microsoft and his wife Melinda Gates made the headlines across the globe by announcing about their divorce after 27 years...