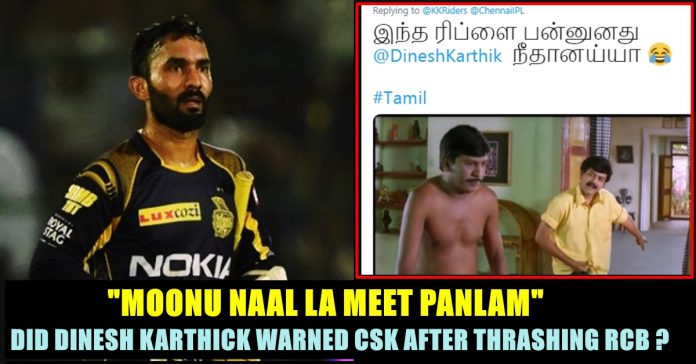 Russell show was expected after skipper Karthik’s departure. The equation was 64 off 22 balls, and many expected the all-rounder to fail on account of the law of averages. However, he smoked almost everything to once again star in KKR’s win this season. He smashed Stoinis for back-to-back sixes but the party began in the visitors’ camp in the penultimate over bowled by Tim Southee.

The New Zealander bowled just one yorker and offered length-balls to see them disappear from the stadium. Russell blasted four sixes and a four to add 29 runs and seal the deal. In the ongoing season, Russell has scores of 49* (off 19 balls vs SRH), 48 (off 17 balls vs KXIP), 62 (off 28 balls vs DC) and 48* (off 13 balls vs RCB). Chennai Super King’s replied in a most hilarious way by uploading a Vadivelu meme template :

Many fans started presuming that the tweet was posted by no one but the captain himself. Being a Tamilan there are many chances for it as well. Check out some of their replies here :

When DK logged in & tweeted from KKR’s handle. https://t.co/wYMIWvA9Y3

Do you also think that this reply would have been tweeted by Dinesh ?? Comment your views below !!

Previous articleFirst Look Photoshoot Of Thalaivar 166 Leaked ?? This Famous Hero To Play Villain !!
Next articleRCB’s First Post After The Disastrous Loss Against KKR !! Trolled By Their Own Fans !!

Chennai Corporation Replied To Public Over The Damage Of The Wooden Ramp!!

Cyclone Mandous which is causing heavy rainfall and powercut throughout the city, damaged the wooden ramp which was recently built by Chennai corporation for...