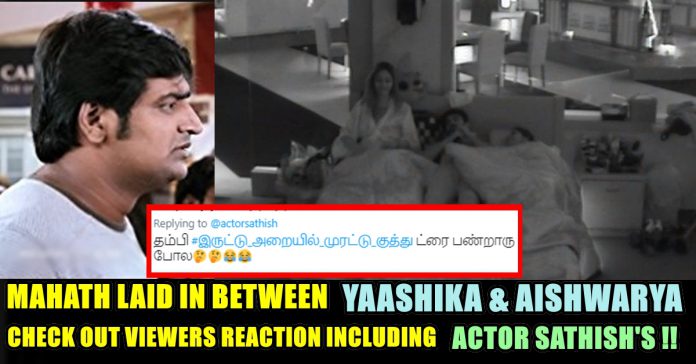 At the end of first weekend Kamal Haasan started it by comparing the depression that people were under when Thomas Alva Edison had initially discovered the light bulb, to being in the Bigg Boss 2 Tamil house where there is no way the contestants are able to keep a track of time.

He then takes the audience through what happened on Day 6.

Mumtaz and Nithya’s enmity continues and as a result, the housemates suffer. Against the rules, Vaishnavi helps the team and serves breakfast to Ananth. Janani, who notices all this, tries to stop but Ananth interrupts. He asks, “How come it was fine for Mamathi to help, but not Vaishnavi? I feel like you are blaming me when that is not the case.” Janani explains that she was not blaming, and also mentions that she did not notice Mamathi helping the other day. Soon, Janani tries to advise Aishwarya about her outfit and gets snubbed. Aishwarya retorts saying she knows what she is wearing and is comfortable in it. She wonders why everybody is trying to demotivate her. Janani ends up crying because everyone misinterprets what she says. Aishwarya cools down after a bit and apologises to Janani.

The day progresses and after the lights are switched off, Sharik confesses his fondness for Aishwarya. “I really like you,” he tells her and then repeats himself. Aishwarya explains that she has a lot of responsibilities and as a head of the family she cannot do much that will affect them. Sharik explains that he really likes her and he would want her to think about this after the show comes to an end. Next day, we get meet the contestants in the house as Kamal speaks to them. People who speak in English are admonished by him. Aishwarya and Yaashika are also appreciated for trying to speak in a language that they do not know. Sharik and Mumtaz get emotional about the bond they share. The housemates comfort both of them.

Kamal then discuss the week gone by and asks Janani who all need to step up their game. She names Balaji and tells that he needs to be more active with the tasks. She also points out that Mahat should stop sleeping in the afternoon. She further adds that Nithya needed to be pushed, but is now performing her tasks better. Kamal then speaks about the onion problem. Everyone guesses that Nithya had a problem with adding onions in food while cooking because of Balaji. It was he who had suggested the idea. Balaji agrees. Mahat also points out that the onions were being wasted.
After this the 2nd week started with Nithya being elected as direct leader of the week which was announced by previous week’s leader Janani. After the light switched off Mahat, Aishwarya Dutta and Yashika Anand planned a prank on the housemates. Mahat laid in between Yashika and Aishwarya and waited for the housemates to react. As they expected balaji panicked and they revealed that it was a prank. For their act viewers reaction was hilarious even the comedy actor Sathish tweeted “Adappavi Mahathu” which is one way to express the extreme shock. Here’s audience reaction to it :

Previous articlePriyanka Chopra Dating Nick Jonas Who Is 10 Years Younger Than Her !! : Check Out How The Fans Thrashing The Duo !!
Next articlePeople Will Feel For Hating BIGG BOSS Julie !! : Here’s The Reason !!