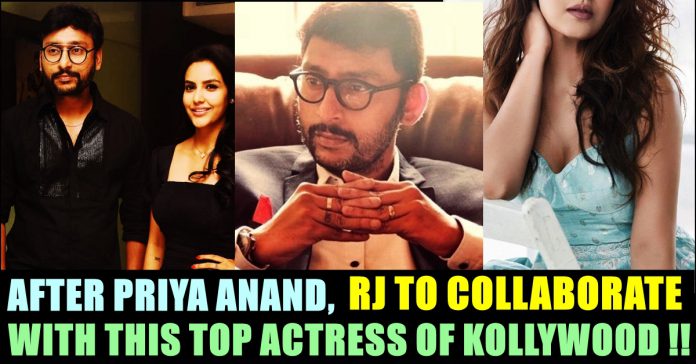 RJ Balaji needs no introduction to the people of Tamilnadu as he is a popular radio jockey, presenter, comedian and actor based in Chennai. He is best known as the host of the BIG 92.7 show Take it Easy once and its now defunct segment Cross Talk, where he made prank calls to unsuspecting victims. After appearing few films as comedian RJ Balaji made his debut as protagonist in his L.K.G film which received positive response from the audience which resulted as success in box office.

It is well known that RJ Balaji also did writing for his debut film. Now a recent news says that the multi talented is all set to start his next project by having Lady Superstar Nayanthara in it. The film which seems to be a female oriented one is titled as “Mookuthi Amman” and is said to be a satire comedy.

The official announcement about her project with R.J Balaji is expected to be announced by R.J Balaji himself during the third T20 between India and Bangladesh on Sunday. Regarding the same Balaji in his twitter account wrote “ll be there for the Sunday match and coming with a BIG announcement during the INDvBAN final T20 on @StarSportsTamil 😇❤️”

Ill be there for the Sunday match and coming with a BIG announcement during the#INDvBAN final T20 on @StarSportsTamil 😇❤️ https://t.co/bG6DbD748a

Ishari Ganesh of Vels Film International, who funded RJ Balaji’s LKG, will also be bankrolling Mookuthi Amman. However, according to India Today, sources confirmed that the actress will not be paired along with the actor in the film. Nayanthara and RJ Balaji earlier worked together in Vijay Sethupathi starrer Naanum Rowdy Thaan and Sivakarthikeyan starrer Velaikaaran. Their strong bond is very much evident in many events as RJ Balaji is also a close friend of Vignesh Shivan, Nayanthara’s live in partner.

Apart from this project, Nayanthara is also acting in Nettri Kann, a official remake of Korean thriller Blind. The film is Vignesh Shivan’s debut production to which he named as “Rowdy Pictures”. Meanwhile RJ Balaji is expected to be seen in Kamal Haasan’s highly anticipated Indian 2.

What do you think on this collaboration between RJ Balaji and Nayanthara ?? Comment your views !!

The most awaited IPL auction which was taking place in Bengaluru got interrupted after the auctioneer who was commanding the bids got collapsed and...