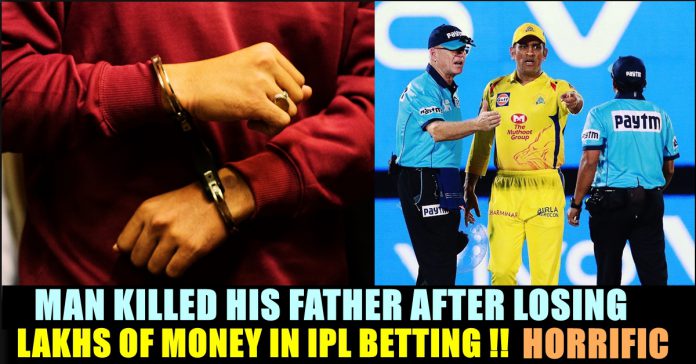 In a tragic incident, a man in Rohtak killed his father in rage after losing lakhs of rupees in betting on the recently concluded Indian Premier League (IPL). Reports inform that the man was arrested along with his juvenile son for his father’s murder. According to a report by Hindustan Times, the victim was a prominent furniture trader and had refused to loan his son more money. Anguished by the father’s behaviour, the accused strangled his father at his furniture shop on May 10. The traders of Kalanaur market, where the shop is situated, had called a bandh for the next few days to protest the murder. Police said the accused had lost a lot of money in betting on IPL matches.

The HT report further informs that after killing his father, the accused called his juvenile son who helped him dispose of the body near the sugar mill in Rohtak. The cunningly accused filed a missing person’s complaint of his father at the police station. The report states that the man, along with his neighbours, conducted searches at several places so that no person would get a hint that he was the culprit. People got suspicious after the man deliberately took them to sugar mill area where he had disposed the body. However, during interrogation, the man confessed to the murder. Police has registered a case of murder against unidentified persons, but got suspicious of the victim’s son’s role when he gave contradictory statements during investigation.

The 12th edition of the IPL began on March 23 and concluded on May 12. On the final day, Mumbai Indians (MI) beat defending champions Chennai Super Kings (CSK) to win 12th edition of IPL at the Rajiv Gandhi International Stadium in Hyderabad. Mumbai won the match by just 1 run. The match caught in controversy for the run out of captain Dhoni and fans also questioned the last ball wicket’s replay in social media platforms.

Famous Actress Condemned Karnataka MLA For His Joke On “R*pe” !!

Congress MLA KR Ramesh Kumar's outrageous remark on "enjoy rape" in the state assembly caused condemnations from all over the country. Hours after the...