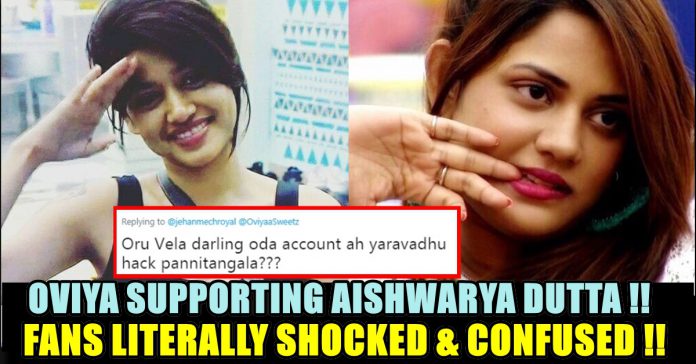 After Sendrayan’s elimination, Kamal Haasan shared his unhappiness over the exit and stated that he wanted Aishwarya Dutta to be out of the house. He wished to directly nominate a contestant for the next week although he was not sure whether it was possible to take the decision in this format of the game.

On the episode aired on Monday, September 10, the Bigg Boss announced that there was no provision for the host to nominate a contestant and it was purely in the hands of the inmates. Bringing variety to the nomination process this week, the inmates were told to have a discussion to suggest two names for elimination.

While Mumtaz was okay being nominated, Aishwarya refused to be in the danger zone and wanted Vijayalakshmi to face the test. As the inmates could not agree upon on the nominations, Bigg Boss then asked the inmates to come up with three names.

It helped the inmates to sorts out differences and Vijayalakshmi and Aishwarya without options were pushed to the danger zone along with Mumtaz. Riythvika was directly nominated last week as she could not convince Mumtaz to complete a task.

Earlier Oviya, the darling of the masses from season one, made a brief appearance on the show as a guest. Before entering the house, the host Kamal Haasan had asked her to not let the contestants know that she wasn’t participating in the game for a while. It was believed that Oviya’s presence would make the game more difficult for other participants. Also, Kamal’s statement led the audience to believe that she will be around on the show for some time. But soon it revealed and she left the show the next day but not from the hearts of fans.

As she has become a favorite contestant among the audience in Bigg Boss season 1, ‘Oviya’s army’ and ‘Oviyans’ have gone crazy on her. A campaign has been launched on the social media platform at that time to garner votes for the much-loved contestant who has managed to charm viewers with her expressions and way of dealing with the others in the house.

Now after long time she has appeared in twitter with a shocking tweet where her fans have asked so many questions but the actress doesn’t replying. Arguably the most hated contestant of this season is Aishwarya Dutta. The most loved person of season 1 Oviya came with a tweet writing her name simply. Without informing anything Oviya just tweeted “#Aishwarya Dutta” in her twitter account.

Most of her fans confused and many of them thought that the account is hacked. Some thought she is supporting Aishwarya Dutta as well. Check out some of the main comments :

It’s not hacked ! She is seeing her self as aishu now ‘ like how oviya faced the house mates

Pls show ur support @OviyaaSweetz by replying to us #SaveAishwarya #BiggBossTamil2

U think her accounts been hacked 😱? Or it’s a prank from on of her friends 😂?

Thalaivi is requesting to vote the new thalaivi cute ❤️Aishu!!!!😎

Babe ma are u all right?

I think Oviya darling you forgot to add the word eliminate in your tweet. Eliminate #AishwaryaDutta

So finally oviya wants to save aishwarya, sure thing we will do it😍😍😍

Ha..ha…She even said in the interview in Srilanka that #mumtaz and #aishwarya are real and they being them selves….so its true that #oviya supports them..and she likes #AishwaryaDutta …..YO #AishwaryaArmy ..here we go..a Bog compliment to You guys….💞💞 feeling happy.

She is a good girl

Oviya😍 why this name🤔 what does it mean. The Girl who reflect opposite shadow of your. Don’t tweet abt her, it really hurts oviya.😞 You said u r not watching BB then why suddenly tweeting her name, she is not that worth oviya.

It is really shocking to see that Aishwarya got this much of supporters on seeing these comments. Who do you think will be out of the house in the 13th week? Vote now & Let us know what do you think on Oviya’s tweet !!

Previous article“Yogi Babu Will Only Do Movies As Hero Hereafter” The Actor Himself Clarifies On The Rumour !!
Next articleFor The First Time Sivakarthikeyan Reveals The Six Pack Picture Of Soori !! Twitter Explodes !!

Chennai Superkings lost by 13 runs against Royal Challengers Bangalore in the match that took place on Wednesday. A video that shows Virat Kohli...

A video of Indian opener Rohit Sharma getting mocked by Pakistan fans while fielding at the boundary line is going viral across the social...