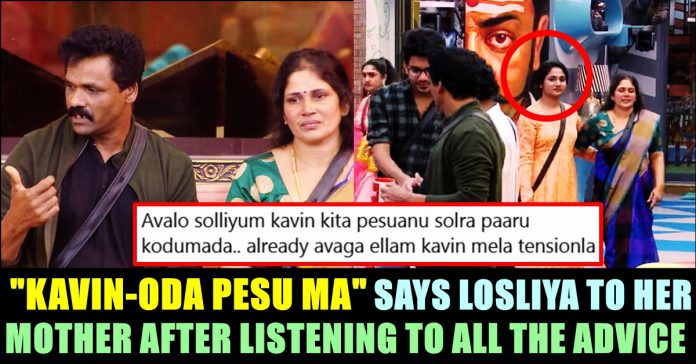 The most anticipated episode of Losliya meeting her father after 10 long years streamed finally. The promo of the yesterday’s episode itself created ruckus in social media as netizens reacted in two different ways. One set of viewers loved the way her father behaved to Losliya and the other set of viewers saw it as a regressive way to restrict his daughter not to love someone.

He entered with Yuvan Shankar Raja’s “Anandha Yazhai” song which made Losliya to scream her heart out and cry. She ran and hugged him but the father looked very much dejected as he was affected by the comments of public. “I didn’t send you here for money. I will even beg for a living. They (public) are saying that I sent you here for money.” he said while stalking to Losliya who was seen crying.

He even talked to Kavin and said that he is not angry with him at all and asked him to play game as a game. “Being a father of my daughter, I will maintain my standard. I felt really bad when people around me talking bad about my daughter. If they are talking like that to infront of me. How extreme they will go in my absence” he worried about the public. “Even people who know me very well asked me if I am going to attend my daughter’s marriage while I was coming here. Imagine how I would have felt.” he said.

This gesture from Losliya receiving major hatred from Netizens as they believe she has not understood the feelings of her father at all. Check out some of their reactions here :

#BiggBossTamil3 los mom or her sisters don’t even want to talk to k kavin 😂 I’m not surprised bcoz not just her mom any parents in that case don’t like person like kavin,..

She was siting in between and looking at him for a while when sandy was talking to@her dad .. 🤦🏼‍♀️