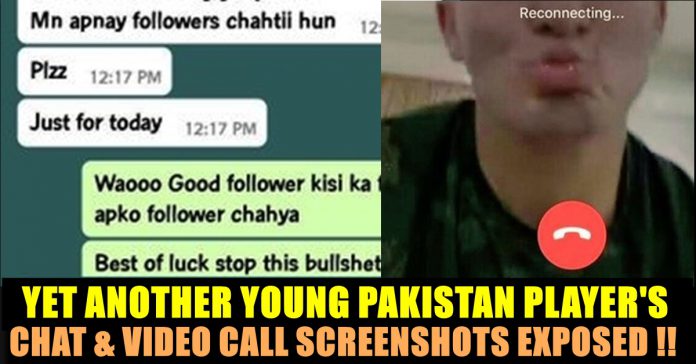 After failing to deliver in the world cup tournament, it seems Pakistani players are in deep trouble as their personal chats are being exposed in social media platforms. Followed by Imam-ul-haq, it seems, Shaheen Afridi caught in controversy as a girl posted a screenshot in her twitter account.

In the tweet, she termed Shaheen Afridi to be the next big fish and warned of more action in the future. The woman also blamed that these cricketers are busy flirting and use their fame and status to lure girls into them. Along with the tweet, she also shared a screenshot of a private video chat in which Shaheen Afridi can be seen pouting. The picture of the girl in the screenshot was hidden.

The young pacer from Khyber Agency has ascended up the ranks quite quickly. His impressive performances in the PSL earned him a place in the Pakistan national team. In whatever chances that he’s got thus far, Afridi has done a great job. He picked up 12 wickets in three Tests and 40 wickets from 19 ODI games.

As soon as the accusation took place, online media users couldn’t keep calm. Check how they reacted for the issue :

On this controversy of #shaheenafridi
Ramiz raja : forgive him he is just 18 years old. pic.twitter.com/acgDjLfPOk

If you think screenshots are enough to declare someone guilty then you are living in 90’s because today you can have fake chat and then make screenshot easily.
#shaheenafridi pic.twitter.com/Pmkgxj94kT

So, this wannabe influencer Feriha turned out to be a hoe. Its all about followers and not harassment.
So here is the logic;
– DM celebs
– Get cheesy
– Exchange Nudes
– Take screenshots
– Make them Viral
– Increase followers & receive public sympathy#ShaheenAfridi #Imamulhaq pic.twitter.com/snfBzwMGuO

Earlier, Imad Wasim was also in the news and was exposed by an Afghanistan woman. While this claim stated that it involved the consent of both the parties, that woman blamed Imad for not being loyal. As per what she said, Imad promised that girl for marriage but later cheated on her. Their pictures did quite some circles in social media.

What do you think on these series of accusations against the Pakistan professional cricketers ?? Comment your views below !!

Vishnu Vishal Opens On Ashwin’s “Mankad” Controversy !! Here’s What He Has To say !!

Every season of the Indian Premier League (IPL) is cash rich and eventful as well. So, keeping up with its ability to make headlines,...