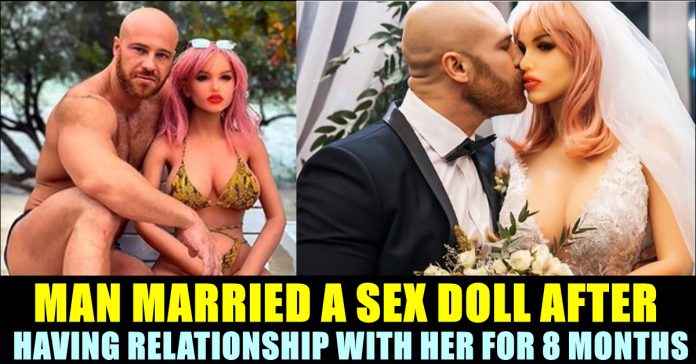 Yuri Tolochko, a popular bodybuilder from Kazakhstan made headlines worldwide after marrying a sex doll with which he was having a relationship for past 2 years. He named the silicon sex doll “Margo” and proposed to her in December 2019. Their wedding delayed two times, once because of COVID 19 and and again after he was assaulted while participating in a transgender rally.

Now, after successfully marrying her, Tolochko has been sharing their pictures and videos in his social media accounts.

While interacting with the media, the body builder said that he paid for her to get plastic surgery despite their “quarrels”, as she developed a complex. He said that he took Margo to a real clinic where humans work to get some work done. “I am sure that must have been an odd day for the surgeons who work there” said Tolochko in an interview.

“When I presented her photo to the world, there was a lot of criticism and she began to develop a complex so we decided to have a plastic surgery. She has changed a lot. At first it was hard to accept, but I got used to it later on. It was at a real clinic with real doctors” he added.

To our shock, Tolochko further claims that Margo has a waitressing job at a local bar. “She can’t walk by herself. She needs help. Margo doesn’t know how to cook, but she loves Georgian cuisine. Her favourite dish is Khinkali” he said. “She swears, but she is a tender soul inside” says Tolochko.

Tolochko further says that he met Margo in a bar after another man made advances on Margo and he was able to step in and protect her, according to Sports Bible. The couple is quite famous and has appeared on several TV shows. To make sure, Tolochko isn’t kidding at all as an official wedding had took place and Margo is now Mrs. Tolochko legally.

This news has hit the internet as soon as the marriage took place. Memes and reactions are pouring from every direction of the world for this bizarre marraige.

Yuri Tolochko, from Kazakhstan, popped the question to Margo in December 2019. The wedding was earlier delayed in the wake of the coronavirus pandemic and an attack on Yuri.

This bit had me dying “Yuri Tolochko is seen planting a gentle kiss on Margo, who appears a bit stiff in her revealing white gown as she clutches a bouquet of flowers and stares into the distance.” 🤣😂🤣😂

"Tolochko said he met Margo at a nightclub, where he rescued her from some unwanted attention."