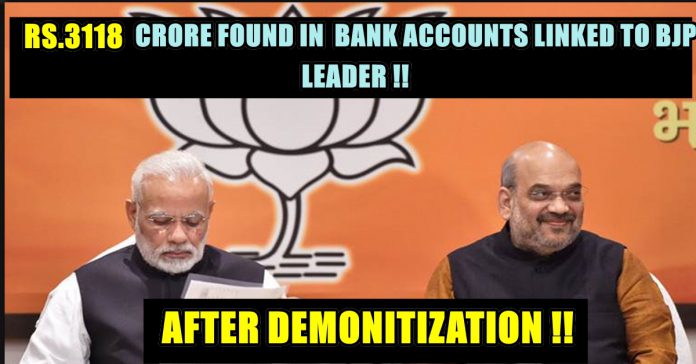 “It is now officially clear that this entire exercise was the biggest scam in independent India, indulged to convert its ill-gotten ‘black money’ into ‘white’,” Congress spokesperson Randeep Surjewala said in a statement.

Yesterday, the Indo-Asian News Service (IANS) published a report on the RTI information cited by the Congress. These details were obtained by the activist Manoranjan S Roy and provided by the chief general manager and appellate authority of NABARD. The news agency said BJP president Amit Shah was the bank’s chairman in 2000, and continues to be a director — a position he has held for several years.

Millions of Indians whose lives were destroyed by Demonetisation, salute your achievement. #ShahZyadaKhaGaya pic.twitter.com/rf1QaGmzxV

NABARD said today that the deposits at the bank were in line with its size, and all KYC norms were adhered to. It saw nothing unusual in the scrapped notes deposited or exchanged between November 10 and 14 in 2016.

“Right behind ADCB,” IANS’s report said, “is the Rajkot District Cooperative Bank, whose chairman Jayeshbhai Vitthalbhai Radadiya is a cabinet minister in Gujarat Chief Minister Vijay Rupani’s government. It got deposits of old currencies worth Rs 693.19 crore. Interestingly, Rajkot is the hub of Gujarat BJP politics — Prime Minister Modi was first elected from there as a legislator in 2001.” “Incidentally, the figures of Ahmedabad-Rajkot DCCBs are much higher than the apex Gujarat State Cooperative Bank Ltd, which got deposits of a mere Rs 1.11 crore.”

IANS observed that all district cooperative banks were banned from accepting deposits of demonetised notes after November 14, 2016 — five days after the note ban — “on fears that black money would be laundered through this route”.

The party said, citing information it published in an annexure to its statement (see below), that the RTI information “reveals the important national picture, which further establishes that the entire exercise of demonetisation was meant to benefit a select group of BJP cronies…”

“…States ruled by BJP and its allies/supporters got the largest proportion of deposits in the district cooperative banks i.e Rs 14,293.71 crore out of Rs 22,270 crore (64.18 per cent), compared to non-BJP ruled states at the time of demonetisation.” The Most Expected Tweets From Harbhajan & Tahir !! Check Which Movies They Chose This Time !!

Chennai Super Kings are maintaining a 100% win rate at home this season. They have clinched this match by 22 runs, a comprehensive win...

Elimination result of this week Bigg Boss show leaked amidst much anticipation of viewers. Last week, Nadia Chang became the first contestant to get...