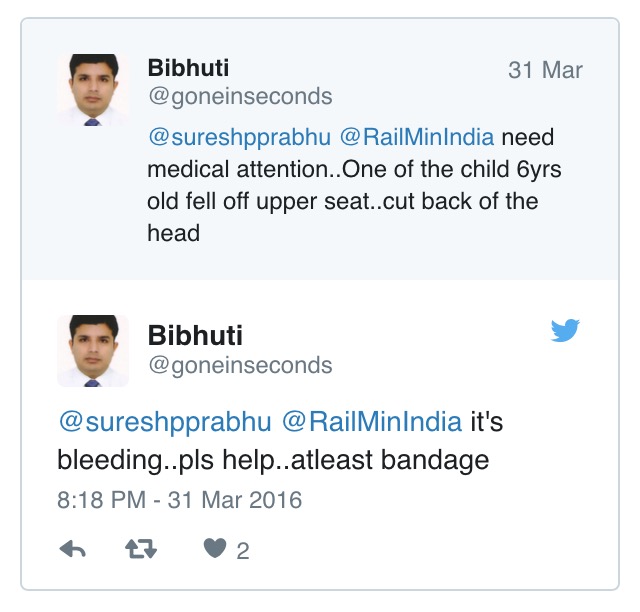 After our Railway
Minister, Suresh Prabhu proved his
calibre by taking a tweet of a passenger and cleaning the dustbin in a railway
compartment, he now excels himself by sending medical help when a passenger
tweeted for it!
Bibhuti, a
father of a 6 year old child, travelling the railways had a panic attack when
his child fell down from the upper birth and slashed his head at the back. Not
having any other help, he immediately tweeted asking for help.

The Railway
Minister wasted no time and responded in 20 minutes flat asking for the
father’s mobile number as he could contact him.

Once Bibhuti
shared his number, Suresh Prabhu immediately forwarded the issue to the concerned
team and said that the medical help will reach him in the Ludhiana  station.
And within
minutes the medical team was contacted and help was sent to the injured child.

Bibhuti
profusely thanked the railway system for taking care of the issue and for giving
timely assistance!

Well, our
Indian Railways has sure gone a long way in treating the citizen right and
being very helpful in the time of need. Also, let us not forget the awesome use
that technology gives us these days!!