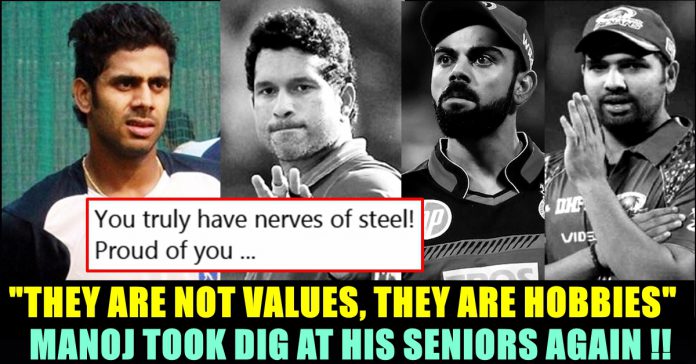 After Calling Them As “Puppets”, Manoj Tiwari Takes Dig At His Seniors Again !!

Manoj Tiwari who uploaded a tweet saying that he is watching a “puppet” show, came up with a new tweet depicting what is sticking to values. The cricketer uploaded the tweet before he was going to sleep on Friday and the tweet garnered a wide reach among the users of the micro blogging social media site with reactions appreciating the 35 year old.

Since the evening of Wednesday, entire cricketing fraternity came up with tweets opining about “India being together” and raised their voices against external forces involving in the politics of India. Starting from Sachin Tendulkar to current Indian captain Virat Kohli, almost all the top tier cricketers uploaded tweets advising their followers to be together.

As soon as these tweets grabbed the headlines across the world, Indian popular sports personalities starting from Sachin Tendulkar to former Indian all rounder Suresh Raina, many cricketers uploaded tweets indicating that Indians should decide for India. Some of the other big names such as Rohit Sharma, Ajinkya Rahane, Hardik Pandya, Anil Kumble, Ravi Shashtri came up with tweets advising their followers to be united.

Manoj Tiwari who represented team India during his prime, taking dig at his seniors, uploaded a tweet saying that if people don’t stick to their values when they are being tested, they are not values but hobbies. “If u don’t stick to your values when they’re being tested, they’re not values, they’re hobbies. Something to think about before going to sleep.” his tweet said.

If u don't stick to your values when they're being tested, they're not values, they're hobbies 👍
Something to think about before going to sleep.

Earlier, the former right hand batsman said that he saw a puppet show after 35 years in his life, referring to the tweets of the cricketers. “When I was a kid, I never saw a puppet show. It took me 35 years to see one” the caption of his post read.

When I was a kid, I never saw a puppet show. It took me 35 years to see one 😊 pic.twitter.com/AMCGIZMfGN

Check out some of the reactions for the recent tweet of him:

You have won our hearts ❤️

Please lecture your seniors the art of growing a spine.

When eminent Indian ppl compromise their values for money/fear of being harassed and fail to speak up against the oppressor, they become #IndianSellebrities

You truly have nerves of steel!
Proud of you …
Values maketh a MAN!

You are a star. Really applaud your courage. 💜

You made me to follow you BROTHER… Standing tall..

I know how they downplay talented player like you, manish pandey, suryakumar.. but held your head high brother you have many fan.

Vaughan Criticized India’s Decision Of Not Including Kuldeep Yadav !! Check The Replies He Received

India ended the day one of first test against England by picking up just three wickets and conceded 263 runs. England captain Joe Root...

SHOCKER : Kanchana 3 Heroine Sexually Harassed By This Photographer & He Blackmailed To Release Her Pictures !!

Ri Djavi Alexander is a Russian model who made her appearance in recently released Kanchana 3. She acted as one of the pair of...